The search for gravitational waves has revealed new information about the core of one of the most famous objects in the sky: the Crab Pulsar in the Crab Nebula.

An analysis by the international LIGO (Laser Interferometer Gravitational-Wave Observatory) Scientific Collaboration, to be submitted to Astrophysical Journal Letters, has shown that although the pulsar is losing energy at a rapid rate, less than 4% of this energy loss is caused by gravitational waves.

This means that for the Crab Pulsar, gravitational waves are not the dominant mechanism causing it to slow down.  It also means that the shape of the pulsar must be very symmetrical with a surface varying by less than a metre.  The physical mechanisms for energy loss and the accompanying braking of the pulsar spin rate have been hypothesized to be asymmetric particle emission, magnetic dipole radiation, and gravitational-wave emission.

Graham Woan of the University of Glasgow, who co-led the science group that used LIGO data to analyse the Crab Pulsar, along with Michael Landry of the LIGO Hanford Observatory said: 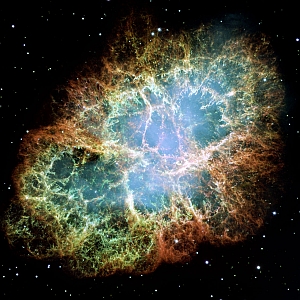 "The Crab Pulsar is spinning at a rate of 30 times per second. However, its rotation rate is decreasing rapidly relative to most pulsars, indicating that it is radiating energy at a prodigious rate. The Crab neutron star is relatively young and therefore expected to be less symmetrical than most, which means it could generate more gravitational waves.”

"This is an exciting result which adds to LIGO's continuing success.  The project has allowed us to study the Crab Pulsar in a new and unique way and has provided us with some fascinating information. This is also the first time we've been able to estimate the role played by gravitational waves in the slowing down of a neutron star and is an important stepping stone on the way to actually detecting gravitational waves."

The Crab Nebula, located 6,500 light years away in the constellation Taurus, was formed in a spectacular supernova explosion in 1054.  According to ancient sources, including Chinese texts that referred to it as a ‘guest star,’ the explosion was visible in daylight for more than three weeks, and may briefly have been brighter than the full moon. At the heart of the nebula remains an incredibly rapidly spinning neutron star (the collapsed remnant of a massive star) that sweeps two narrow radio beams across the Earth each time it turns. The lighthouse-like radio pulses have given the star the name ‘pulsar.’ Pulsars are almost perfect spheres made up of neutrons and contain more mass than the sun in an object only 10 km in radius.

Gravitational waves are ripples in the fabric of space and time and are an important consequence of Einstein's general theory of relativity. A perfectly smooth neutron star will not generate gravitational waves as it spins, but the situation changes if its shape is distorted.  Gravitational waves would have been detectable even if the star were deformed by only a few meters, which could arise because its semisolid crust is strained or because its enormous magnetic field distorts it.

The scenario that gravitational waves significantly brake the Crab pulsar has been disproved by the new analysis.  Using published timing data about the pulsar rotation rate from the Jodrell Bank Observatory, LIGO scientists monitored the neutron star from November 2005 to August 2006 and looked for a synchronous gravitational-wave signal using data from the three LIGO interferometers, which were combined to create a single, highly sensitive detector.

Matt Pitkin, also of Glasgow University, who worked on the data analysis said:

"LIGO measures changes in the relative separation of masses, suspended several kilometres apart, caused by the passage of gravitational waves through the instrument. We looked for regular variations in this separation synchronised with the rotation of the neutron star in the Crab nebula.”

The analysis revealed no signs of gravitational waves. But, say the scientists, this result is itself important because it provides information about the pulsar and its structure.

David Reitze, a professor of physics at the University of Florida and spokesperson for the LIGO Scientific Collaboration said: "We can now say something definite about the role gravitational waves play in the dynamics of the Crab Pulsar based on our observations. This is the first time the spin-down limit has been broken for any pulsar, and this result is an important milestone for LIGO."

Michael Landry said: "These results strongly imply that no more than 4 percent of the pulsar's energy loss is due to gravitational radiation. The remainder of the loss must be due to other mechanisms, such as a combination of electromagnetic radiation generated by the rapidly rotating magnetic field of the pulsar and the emission of high-velocity particles into the nebula."

"Neutron stars are very hot when they are formed in a supernova, and then they cool rapidly and form a semisolid crust. Our observation of a relatively young star like the Crab is important because it shows that this skin, if it had irregularities when it first 'froze,' has by now become quite smooth.”

Joseph Taylor, a Nobel Prize-winning radio astronomer and professor of physics at Princeton University, said: "The physics world has been waiting eagerly for scientific results from LIGO. It is exciting that we now know something concrete about how nearly spherical a neutron star must be, and we have definite limits on the strength of its internal magnetic field."

The LIGO project, which is funded by the National Science Foundation, was designed and is operated by Caltech and the Massachusetts Institute of Technology for the purpose of detecting gravitational waves, and for the development of gravitational-wave observations as an astronomical tool.

Research is carried out by the LIGO Scientific Collaboration, a group of 600 scientists from 12 different countries. The LIGO Scientific Collaboration interferometer network includes the LIGO interferometers (including the 2 km and 4 km detectors in Hanford, Washington, and a 4 km instrument in Livingston,
Louisiana) and the GEO600 interferometer, located in Hannover, Germany, and designed and operated by scientists from the Max Planck Institute for Gravitational Physics and partners in the United Kingdom funded by the Science and Technology Facilities Council.

The next major milestone for LIGO is the Advanced LIGO Project, slated for operation in 2014. Advanced LIGO, which will utilize the infrastructure of the LIGO observatories, will be 10 times more sensitive. Advanced LIGO will incorporate advanced designs and technologies that have been developed by the LIGO Scientific Collaboration. It is supported by the NSF, with additional contributions from the Science and Technology Facilities Council and the German Max Planck Gessellschaft.

The increased sensitivity will be important because it will allow scientists to detect cataclysmic events such as black-hole and neutron-star collisions at ten-times-greater distances and to search for much smaller ‘hills’ on the Crab Pulsar.