The art of communication

A new exhibition exploring the role of communication in art and medicine will be launched on 8 July.

The novel collection of ten works of art was inspired by, and will be displayed in, the rooms at the University of Glasgow’s Medical School where students are taught how to communicate with patients through role-play with actors.

Artist Christine Borland developed the concept of the exhibition after observing students practice their communications skills in these simulated consultations.

She said: “It intrigued me to watch the students being evaluated on skills such as eye contact, body language, use of silence and empathy. A lot of the training that takes place in the Communications Suite in the Medical School is very visual, involving role-play and analysis of footage of these interactions. The ten artists participating in this exhibition used these ideas to inspire a range of art works including video, sculpture and performance pieces, which explore the fundamental importance of communication in all human relationships” 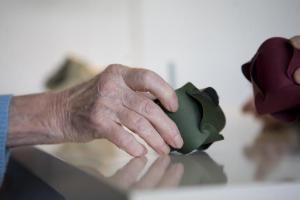 The works include a sculpture using medical mannequins, a performance piece based on the 1960s US military Dolphin Communication Programme and a choreographed video piece involving actors who work as patients during the training of students.

The exhibition will run from 8 July to 1 August 2008, Monday – Friday, 10am – 4pm, in the Communication Suite, Wolfson Medical Building, University of Glasgow.

A panel discussion, led by Christine Borland and several of the participating artists, will take place in the atrium of the Wolfson Medical School Building, University of Glasgow on Tuesday, July 8 at 4.30pm. All welcome.

The exhibition will feature as part of the Fifth Annual Meeting of the Association for Medical Humanities at the University. More details on the meeting can be found at http://www.amh.ac.uk/


The contributing artists and details of their works are as follows:

The other works included in the exhibition are:

The exhibition is sponsored by the University of Glasgow, the Scottish Arts Council, the Association for Medical Humanities and the Glasgow School of Art where Christine Borland is an Academic Researcher.