Renowned artist Hamish MacDonald has donated his most recent drawings to the University of Glasgow Medical School.

Regarded as one of Scotland's most successful contemporary artists, he has given 36 works on permanent loan to the Faculty of Medicine. They are to be hung in the atrium of the Wolfson Medical School Building.

Hamish produced the works while receiving treatment at the Beatson West of Scotland Cancer Care Centre.

Collectively known as the Beatson Drawings, they will be unveiled at a ceremony on April 9.

Hamish said: “Everywhere I go, my sketchpad goes with me and that included to my treatment sessions. Drawing helped while away the hours at the Beatson and it kept my mind busy – I find it very therapeutic.

“The drawings were all been produced during my chemotherapy sessions between October 2007 and February 2008.

“I simply drew what was around me - the other patients, the nursing staff and the doctors – anything that caught my eye.

“I am a firm believer in the power that art has to inspire and help alleviate suffering and that it can play a key role in lessening the burden that illness brings.

“My hope is that by hanging these drawings in the atrium of the University of Glasgow Medical School, they will inspire the doctors of tomorrow, and those who are training them, to remember the role that artistic therapy plays in helping patients.”

When the Chancellor of the University of Glasgow, Professor Sir Kenneth Calman, met Hamish, he was struck by both his attitude and talents.

He said: “One of my interests is the relationship between art and medicine and the role that art plays in the treatment of patients.

“These exceptional drawings are a welcome addition to the Wolfson building and we are very grateful to Hamish for the kind long-term loan of the drawings.

“The staff and students of the University Medical Faculty will get great joy from the Beatson Collection and I would like to thank Hamish on behalf of the entire University.”

As part of the gift, Hamish has given the University the copyright to the images which will allow postcards and prints of the drawing will be sold to help raise money for the fundraising drive to support the construction of the £10million Beatson Translational Research Centre.

Hamish MacDonald was born in Glasgow in 1935. He studied at Glasgow School of Art between 1963 and 1967 and from 1968 he successfully combined painting with teaching and also guest lectured throughout Scotland.

In 1991 he retired from his post as an Art Department Principal to concentrate fully on the development of his painting. 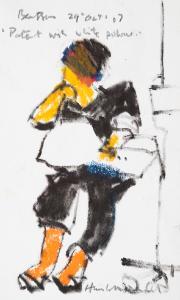 His artistic influence is drawn from a diversity of sources including the Impressionists and the Scottish Colourists together with perhaps most noticeably the works of Gillies and Eardley. His broad, fluid style and bold palette place him directly within the continuing lineage of the Scottish Colourist tradition whilst his ability to capture the atmosphere and vitality of his subject is enhanced by a confident and mature style.

Hamish is now widely regarded as one of Scotland's most successful contemporary artists. Since 1963, he has staged numerous solo exhibitions in Scotland and participated in group shows with prominent galleries in London and throughout the UK.

His works can be found in many major collections, including HRH The Duke of Edinburgh, Kelvingrove Art Gallery, Paisley Art Gallery, Burmah Oil Company and several UK education authorities and regional councils.

His awards include: National Prizewinner Laing Competition (1989) and RGI Royal College of Physicians Award (1993). His work is also well represented as cards, and his limited edition prints are now enthusiastically collected.

For more information please contact Ray McHugh in the University of Glasgow Media Relations Office on 0141 330 3535 or email r.mchugh@admin.gla.ac.uk