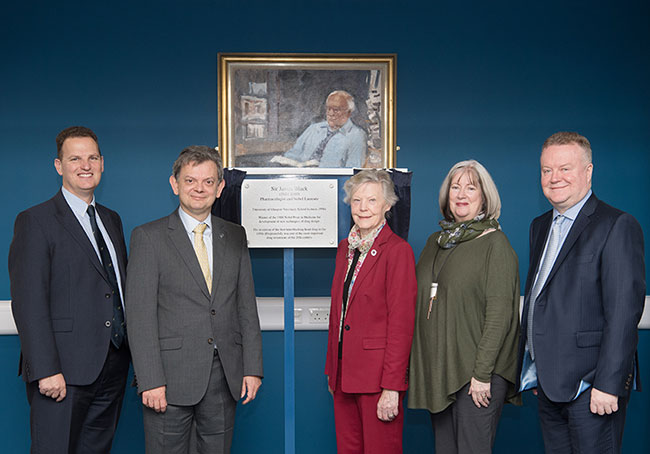 Sir James, who joined the Veterinary School in 1950 and established the Department of Veterinary Physiology at Glasgow, was best known for his work on beta-blockers and for devising a way of curbing stomach acidity to aid the healing of ulcers.

He was awarded the Nobel Prize in Medicine, along with fellow scientists Gertrude Elion and George Hitchings, for developing important principles for drug treatments.

Professor Sir Anton Muscatelli, Principal and Vice-Chancellor of the University of Glasgow, said: “Sir James was undoubtedly one of the greatest scientists of the modern age. Through his commitment, intellect and insight he achieved a global impact and his discoveries continue to improve the lives of many.”

The unveiling of a plaque was attended by Sir James Black’s wife, Professor Rona Mackie Black, Emeritus Professor and Senior Research Fellow in Public Health within the University's Institute of Health and Wellbeing. Professor Mackie Black is a leading authority on skin cancer with a special interest in the changing epidemiology of melanoma in Scotland.

After graduating in Medicine from the University of St Andrews, Sir James became a lecturer in Singapore (then Malaya) before moving back to Scotland to take up the post at the Veterinary School.

In 1958, Black joined the pharmaceuticals company ICI and later worked for Smith, Kline & French and with Wellcome Research Laboratories.

Sir James was knighted in 1981 and was the Chancellor of the University of Dundee from 1992 until May 2006. In 1989, the University of Glasgow awarded him the honorary degree of Doctor of Science. In 2000 he was given the Order of Merit, the highest honour that can be bestowed upon an individual personally by the Queen.