Thank you to everyone who joined us for our #RemembranceSunday commemorations. #ArmisticeDay100 #LestWeForget #WeWillRememberThem@ArtilleryRoyal pic.twitter.com/T0VYROLxiB

Three guns fired a total of six blank rounds in 15-second intervals from the grounds of the University of Glasgow on Sunday 11 November 2018.

They then fall silent just before 11am to mark the centenary of the end of World War 1, mirroring the events of 100 years before.

This was be a key point in the University’s Remembrance Sunday commemorations which this year fell on 11 November, Armistice Day. As the guns fall silent the Last Post played and a two-minute silence was observed.

University Chaplain the Reverend Stuart MacQuarrie said: “Over the last four years we have commemorated the centenary of the First World War remembering each of our fallen on the 100th anniversary of their death. Now, on 11 November, we remember and honour all those 781 who died from our University of Glasgow community and indeed all those who lost their lives.

“The Memorial Chapel was built to remember the great sacrifice made by the University’s students, staff and alumni during the First World War. With Armistice Day falling on Remembrance Sunday 100 years after the guns fell silent, we are honoured to have been chosen as the location in Glasgow for this poignant tribute from the Royal Artillery.

“And in the evening we are holding a time for reflection using candles to remember each of our 781 fallen who never came back from war.”

Captain Tim Smalley from The Royal Artillery said: “The First World War was considered to be an artillery war. Over four years billions of shells were fired across the trenches by both sides. But on the 11th hour of the 11th day of the 11th month, the guns fell silent and the war was over.

“So it seems fitting that the Royal Artillery would recreate this poignant moment for the centenary of the end of the war. When the firing of our blank rounds is complete on Sunday, the barrels of the guns are slowly lowered to reinforce visually that they are out of action.

“We are honoured to be involved in this event at the University of Glasgow. We will also be paying our tribute to those Royal Artillery soldiers who served during the First World War and to remember the fallen and their great sacrifice.”

Among those present for the Remembrance Sunday commemorations was Barbara Holliday whose great uncle from Glasgow - Second Lieutenant Matthew Neilson Taylor - died in the war.

“Although I never knew him, Matthew has become as much a part of my life as the aunts and uncles I have shared my life with and therefore I feel a need to share this memorial as the last place where Matthew would have felt young and carefree.”

On the evening of Sunday 11 November, a dedication ceremony took  place in the University Memorial Chapel. A research project uncovered 21 names which had been left off the University’s Roll of Honour for various reasons.

These names have now been added to the memorial plaques in the chapel and a centenary stone honouring Glasgow’s first Victoria Cross recipient and University alumnus, Captain Harry Ranken has been placed in the floor of the chapel. 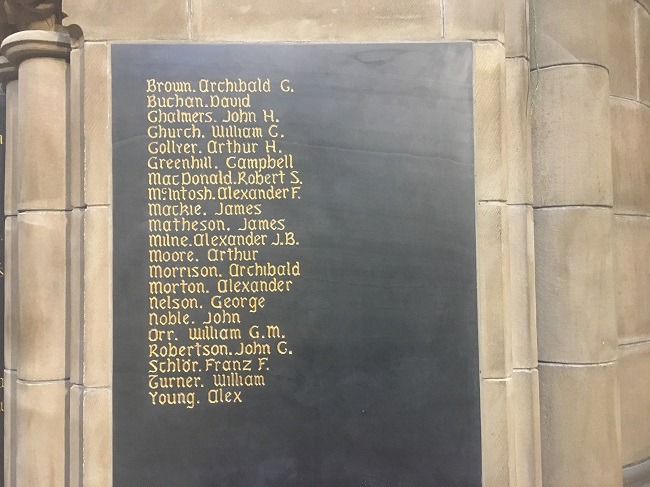 To mark this dedication ceremony, a small act of remembrance took place at 8pm in the Chapel. At the event, a candle was lit and placed at the altar to represent each the 780 men, including German Franz Schlör, and one woman Elizabeth Ross who are remembered on the memorial panels which line the walls of the chapel. A prayer of reflection was also read by Rev MacQuarrie.

The University of Glasgow sacrificed a significant proportion of its membership to the Great War, with over 4500 serving and 781 losing their lives.

Tonight in a vigil we light a candle for each of the 780 men & one woman from our community who died in #WW1 & will dedicate a panel with 21 names found following research which had been left off our memorial. You can watch on webcam now https://t.co/y1EZxJtWph #ArmisticeDay100 pic.twitter.com/uEWCiP7gYR

The University WW1 project marks the death of every member of the University community to be killed in war regardless of which side they fought on.

This year, the University also took part in Poppy Scotland’s 2018 Light Up Red campaign where iconic buildings, landmarks and structures went  red in support of the Poppy Appeal. The floodlights on the bell tower at the University turned red from 8pm on the evenings of the 10 and 11 November 2018.