It is official! Guinness World Records has verified that the University of Glasgow’s Dental School successfully created the world’s biggest ever smile during the Big Smile Big Band event at the SEC Glasgow on 9 June 2017.

It was an event two years in planning to mark National Smile Month, which itself is organised each year by the Oral Health Foundation. The event was the result of a light-hearted comment made during discussions between Professor Jeremy Bagg (Head of the Dental School at the University of Glasgow) and Dr Will McLean (Lead for Alumni Development at the Dental School) about the next big event for Glasgow Dental School.

Will had remembered from his childhood Roy Castle asking “Do you want to be a record breaker?” and it was agreed at that meeting, that surely many would like to be - so the wheels were set in motion to break a world record! With this in mind, Dental School and other University staff, dental alumni, schoolchildren and teachers from the Glasgow area were invited to form the lips and teeth of a giant smile to highlight the importance of good oral health and set a Guinness World Record. 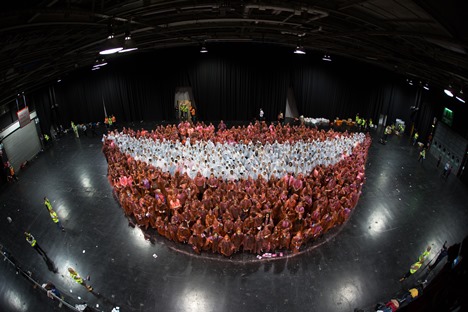 Professor Jeremy Bagg, said: “I am delighted that we were able to achieve our aim of setting a Guinness World Record by assembling more than 750 participants in the shape of a big smile as Glasgow’s contribution to National Smile Month. The event was a huge amount of fun to organise and our sincere thanks go to all of the many partners and organisations involved who helped to make this happen. The promotion of oral health, particularly in children, is an important message to get across. We hope that our record breaking event has been both fun and educational for all involved.”

Professor Bun San Chong, President of the British Endodontic Society, the major sponsor of the Big Smile Big Band event said: "As a society that promotes the importance of maintaining teeth for life, we saw this as a fantastic opportunity to engage in an exciting oral health promotion event - the significance of making healthy choices for our teeth is often forgotten and sometimes the value of treating teeth to allow them to be retained when they become diseased underestimated."

This event only represents the beginning of a wider community engagement project. Maybe another record is on the cards … only time will tell!