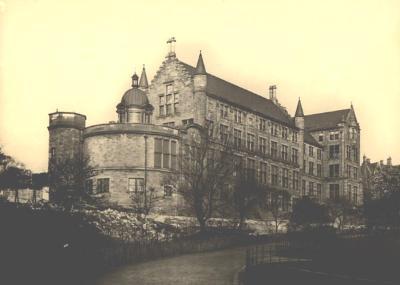 With the Royal appointment of the Regius Chair of Medical Jurisprudence in 1839, the Department of Forensic Medicine and Science at the University of Glasgow was founded. Although teaching in forensic medicine had been provided in the Medical School of Glasgow prior to 1839, it had not been formally instituted in the University. The first appointment to the Chair was Robert Cowan, whose title appeared in Royal Warrant as Professor of Medical Jurisprudence and Forensic Medicine, but was known in practice as Professor of Medical Jurisprudence and Medical Police and was described as such in the University Calendars. Teaching was initially provided within the Faculty of Medicine and in 1864 forensic medicine also became a part of the law curriculum.

During the tenure of the second Regius Professor, Harry Rainy, the chair was usually referred to as Forensic Medicine rather than Medical Jurisprudence. In 1894 the department itself became known as Forensic Medicine, but still offered teaching in medico-legal subjects and public health. Lectures were intended to elucidate the application of medical science to civil or criminal judicial proceedings. The department was housed in the new Gilbert Scott building (opened in 1870) in the East Quadrangle, occupying a lecture theatre and three rooms.

When John Glaister was appointed in 1898, it was as Professor of Forensic Medicine and Public Health, teaching medical jurisprudence to law students and both medical jurisprudence and public health to medical students. In 1903 Professor Glaister began teaching the first Bachelor of Science (B.Sc.) and Doctor of Science (D.Sc.) degrees in Public Health at the University of Glasgow, but gave up teaching this subject in 1922, ending the relationship between public health and forensic medicine at the University. A new chair of public health was created in 1923 (Ordinance 113). In 1907, Forensic Medicine moved into purpose built accommodation in the new medical buildings. Glaister became a hugely influential figure in the Scottish legal system, after becoming Medico-legal Examiner in Crown cases in the West of Scotland and providing medical evidence in notable criminal trials in neighbouring and other districts.

His son, John Glaister Jnr. joined the department in 1919 to work as an assistant, returning in 1931 as Regius Professor. The two men built one of the United Kingdom's leading Forensic Medicine and Science departments, and their impact and influence remains significant in the field due to their high profile work and their textbook, Medical Jurisprudence and Toxicology , which ran to thirteen editions between 1902 and 1973. In 1979 the department became known as Forensic Medicine and Science, the name it retains to this day. At the end of 1987, the department moved from 8 University Gardens (which it had occupied since 1955) to its present location in the Joseph Black building.

The academic unit of Forensic Medicine and Science at the University of Glasgow now encompasses the two disciplines of Forensic Pathology and Forensic Toxicology. Both are primarily service-based, carrying out post mortem examinations for the Procurator Fiscals of Glasgow and the surrounding regions under contract with the Crown Office (the central legal authority in Scotland), but with additional involvement in teaching and research.

The unit is now the longest established academic forensic institution in the United Kingdom (founded 1839), probably the largest, and one of the few to combine pathology and toxicology under one roof.