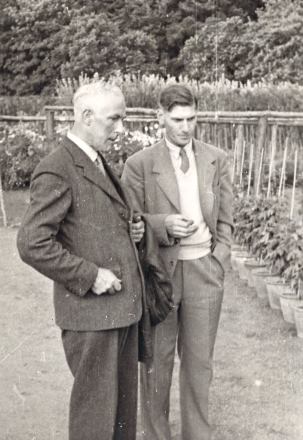 ‌Victor Douglas Eustace Webb was born in March 1915 and after school went on to study law at King’s College London (LLB), and the University of Edinburgh (LLM).  After graduation he worked for the Inland Revenue, firstly at Somerset House in London, and later in their Edinburgh headquarters. Victor retired from the Civil Service in 1975 and started a private laundrette and cleaning company with various shops around Edinburgh.

Webb first owned an allotment in the 1940s having come from a gardening background.  He became involved in the politics of allotments in the 1950s after a dispute about building near his own allotment.  He was co-opted as a member of the committee of the Scottish Allotments and Gardens Society (SAGS) in the early 1950s; held various organisational positions in the Scottish Allotments Scheme for the Unemployed (SASU), serving as Chair from 1975-1996; and was auditor for the Federation of Edinburgh and district Allotment and Gardens Associations (FEDAGA) in the mid-1960s. He also worked in an advisory capacity with the St Leonard’s Allotment Association and the Edinburgh Allotments and Holders’ Association.

Victor worked tirelessly to maintain the importance of allotments in Scotland and fought against allotment land being lost to town planning and urbanisation.  He protested publicly for the preservation of allotments and throughout his life remained active in their promotion.

Before we were urged as a nation to ‘Dig for Victory’ during WWII, the great depression of the 1930s had raised the spectre of food poverty throughout the UK.  In 1931 the Agricultural Land (Utilisation) Act and the Scottish Allotment Scheme for the Unemployed (SASU) was set up to enable unemployed or seriously impoverished Scottish men and woman to obtain and cultivate allotments.  The scheme was run jointly by the Society of Friends and the Scottish National Union of Allotment Holders to encourage those in need to grow food to feed their families.  Seeds and fertiliser were provided at low cost, as well as tools, and help for fencing and equipment.

SASU operated for many years, later working in conjunction with the Scottish Allotments and Gardens Society (SAGS). The Scheme was modified and expanded to suit the prevailing social and economic conditions of the times so that 'Old Age Pensioners', and post-WWII, ex-service men and their wives, were also eligible for assistance.

Victor Webb, a member of the Society of Friends, who sat on the Joint Committee of SASU from 1948, was known as the movement's 'archivist'.  He collated the papers of SASU from various sources, including a number from the former chairman, Harold G Sharp, and the Honorary Secretary and Treasurer, Alastair McWatt Green.  SASU ran until 1999, by that time Victor Webb had resigned from any official duty, but continued to work in an advisory capacity.

In 1946 the Scottish Allotments and Garden Society (SAGS) was constituted, incorporating Scottish National Union of Allotment Holders (SNUAH) and the Scottish Gardens and Allotments Committee. In the post-war era the economic argument for allotments diminished, statutory protection was removed, and allotment sites were used for housing and commercial development.  Available allotment plots in Scotland were drastically reduced from over 70,000 just after the War, to fewer than 7,000 by the end of the century.  Enthusiasts who cared about the environment and wanted to grow their own food joined SAGS to campaign for the protection and regeneration of allotment sites.  SAGS continues to this day and the primary objective of the Society remains ‘to protect sites, preserve skills in gardening… [and] promote the value of allotments.’  http://www.sags.org.uk/