Explorers’ Stories includes material from expeditions that Cameron has both organised and participated in across Greenland, Tanzania and the Himalayas. The website also encourages and inspires young people to join expeditions, and gives them a platform on which to share their findings with the public. 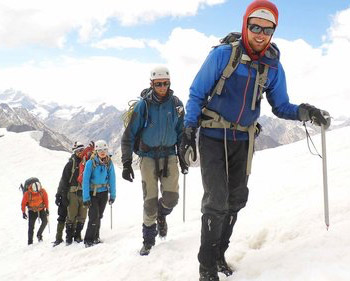 “The climate is always going to change. The really important thing, if you want to solve the issue of living sustainably with a changing landscape, is to use education. There needs to be a feasible connection between current research and the education system, but I was having trouble finding that.

I wanted to address this by creating a body of knowledge and media, putting it on a free platform and then connecting that platform with people in schools. The idea is to have a constant dripping down of cool information to kids.

I think we all remember back to geography classes and these videos from the '80s - synth music and then some older men talking about geography. It was hard to connect with them. Having one gender, one age group, one production style didn't inspire me particularly when I was at school. And without criticising what has come before, I think that we’re further on that that now. We need more women in there, and more young people, in order to engage a larger audience, because stories can be very powerful. They can hit people personally enough to inspire them to make a behavioural change.

It all started even before I came to university. I did an expedition with the British Exploring Society to the Himalayas and I'd seen how climate change was impacting people in remote areas and glaciated areas. I thought: wow, we need to bring this issue back to the UK and share it. I wanted to create an expedition to Greenland, research and film as much as possible, and then show people: this is happening in the Arctic now. This is what our actions are doing.

Working with some friends (Craig Mushet, Emily Macduff and Jamie Wylie), we pulled this idea together and started on the logistics of a trip. Every step of the way it became more difficult than I had thought. The original budget I wrote was £1,000 and then it quickly became £10,000. There was the transport, the food, the accommodation and completing the risk assessment, which was the biggest hurdle, especially when you have hazards like frostbite and polar bears.

By the time we got on the plane, we’d had a lot of stressful late nights, but it was the best thing I've ever done in my life. I had grown up seeing David Attenborough and his team and all these big BBC projects, but suddenly we were just undergraduates who had gone and done it ourselves and it felt amazing.

Greenland is a massive ice sheet surrounded by a rim of coastline. When we were there it was the hottest year it had been. We took as much footage as we could. We had time-lapse cameras, which we positioned on the glacier and you could see the ice coming off. It was amazing how fast that ice was melting. At night in our tents we'd hear thunder and that was just ice breaking off. But what also struck me was how drastically people were being impacted.

One of the big things is ice drains from the glacier. The melting was causing huge flash floods, but the people there were almost having a positive response to it. Tourism was putting Greenland on the map - climate change and mineral exploration were taking place where the ice had gone. We definitely left asking ourselves the question: how do you approach people in places like Greenland and ask them about climate change, when so far it's had both positive benefits and negative effects for them?

I was amazed by the quality of the film that we produced and it wasn't that I was a particularly talented filmmaker, because I'd never done anything like that before. I think it was just because we took a camera to a place that was of interest to us and had a story to tell. 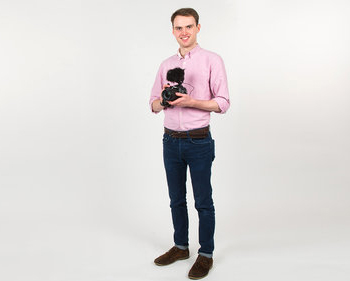 The film was originally shown at the Glasgow IMAX, alongside another film they had for schools and afterwards I spent about 40 minutes there answering questions from 11 and 12-year olds. That was the moment when I realised that this was something really useful.

Coming away from Greenland, we had a blueprint that we wanted to follow - an expedition, expedition filming, and widespread dissemination. We went on to do that with an expedition to Tanzania with the University, and then on an expedition to the Himalayas with the British Exploring Society. This was in the Ladakh region of the northern Indian Himalayas and this was a much more research focused trip, with a friend of mine called Abel McLinden.

Ladakh is a high altitude dessert nestled between the greater Himalayan range and the Karakoram Range. There, the biggest issue is the loss of irrigation water. Glaciers that farmers rely on for meltwater are shrinking. Farming areas are being left and irrigation streams are drying up.

We interviewed 47 local people about climate change in nine different villages. Villages had completely vanished. And the people live off the land completely, so if a tiny thing changes, it has a huge effect on them. These are the people in the world who feel the effects of our environmental decisions and our actions first. It’s not us in the UK.

What I’ve learned from talking to all of these people is that we all want the same thing.  We've all got the same fears and we're ultimately all facing the issue of climate change together. If we want to find a solution, we need to think globally about our actions, and in the UK what that means is that for every decision we make, we've got to not just think about ourselves, our families and our friends. We've got to think, how is a subsistence farmer in Ladakh going to be affected by my actions? How is someone in Greenland going to be impacted?

That’s why I wanted to set up the Explorers’ Stories platform, to house all of these important stories and all of this important information. Then you say: right, Glasgow University Expedition Society, you're doing an amazing trip to Papua New Guinea or Madagascar or wherever; let's use your photos. Everyone comes back from a trip with an amazing story to tell and an album bursting full of pictures. And it’s easy to do a little bit of filming with them to create a story and turn it to a feasible resource that educators and young people love.

For the last several years the biggest emissions of carbon dioxide from the UK have been through transportation and energy provision. And that's completely within our control. We make decisions about our daily use of public transport and we control the energy usage in our own homes. It’s easy to think: oh it's the big corporations, just the governments that make these decisions, but no - it's exactly us.

What you can do is as simple as carpooling, is getting public transport, or buying a reusable coffee cup. Turn your thermostat down, put on a jumper instead, or eat less red meat. These are personal decisions. It's as simple as me communicating with you now; you can absolutely create a positive change yourself.”