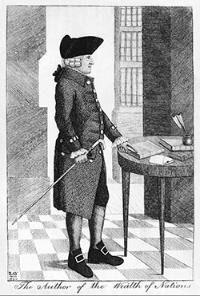 Adam Smith entered Glasgow University in 1737 at the early - but for the time not unusual - age of fourteen. He returned to the University, first as Professor of Logic in 1751 and then a year later as Professor of Moral Philosophy, a post he held until he left academic life in 1764 for the more lucrative post of tutor to the young Duke of Buccleuch. That was not his final association because in 1787 he was elected Rector of the University and in a letter of thanks he remarked that he remembered his professional days at Glasgow as 'by far the most useful and therefore as by far the happiest and most honourable period of my life.'

The University of Glasgow has long been a centre of Adam Smith Scholarship stretching back to James Bonar’s collection of Smith’s Library and W.R. Scott’s work on Adam Smith as Student and Teacher (1937), through the editorial work involved in the preparation of the Glasgow Edition of the Works of Adam Smith in the 1970s (including inter alia A.L. Macfie, D.D. Raphael T.D. Campbell and A.S. Skinner). More recently Professor Alexander Broadie the author of numerous papers on Smith and a recent book on the connections between France and Scotland, and Prof. Christopher J. Berry author of Social Theory of the Scottish Enlightenment and The Idea of Commercial Society in the Scottish Enlightenment have held chairs at Glasgow.

In the last few years the University has renewed its commitment to celebrating the intellectual legacy of one of its most famous sons. The University has renamed its business school the Adam Smith Business School in honour of Smith and has set up an interdisciplinary research foundation dedicated to exploring Smith’s legacy.

Part of the Adam Smith Research Foundation’s work has been to offer visiting fellowships to scholars who want to come to Glasgow to work with the University’s unrivalled collection of primary, archival and secondary literature on Smith.

The ASRF regularly welcomes Smith scholars with visitors from the United States, Japan, China, Turkey, Poland, Spain and Italy spending time in Glasgow over the last two years. In 2013 the University appointed Dr Craig Smith to the position of Adam Smith Lecturer in the Scottish Enlightenment with a specific brief to continue the tradition of work on Adam Smith in the University. Dr Smith now teaches classes on the Scottish Enlightenment and on the Wealth of Nations that are open to students across the University.

VIDEO: an introduction to Adam Smith