Click here to register for this event via eventsforce.net

The International Adam Smith Society and the Rousseau Association will hold a joint meeting at The University of Glasgow 20-22 July 2015. The meeting aims to bring together scholars with an interest in the work of either or both of these thinkers with a view to stimulating discussion of their shared interests and the relationship between two prominent members of the Enlightenment. The meeting will take the form of a series of panels in a workshop format and is being supported by a grant from the British Academy / Leverhulme Research Grant Scheme. 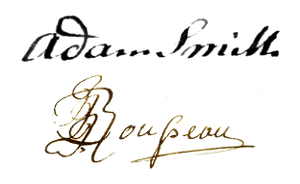 The intellectual influence of Rousseau on Smith has become a matter of increasing scholarly interest. Smith’s first published work was a letter to the Edinburgh Review (1756) where he discusses contemporary philosophy, the Encyclopédie and Rousseau’s Discours sur l‘origine et les fondemens de l’inégalité parmi les hommes (1755). The discussion comes at a key point in Smith’s intellectual development as he lectured at Glasgow and was engaged in writing the Theory of Moral Sentiments (1759) which emerged to great acclaim and established his international reputation. Moreover Rousseau’s essay deals with themes, perhaps most particularly self-interest, freedom and the division of labour in a commercial society, that would come to dominate Smith’s second great work An Inquiry into the Nature and Causes of the Wealth of Nations (1776). Smith also discusses Rousseau in some of his less well known writings such as the Considerations Concerning the First Formation of Languages (1761) and the essay On the Imitative Arts (1795). Part of what makes the intellectual connection between Rousseau and Smith so interesting is that both Smith and Rousseau were polymaths and Smith seems to both absorb some elements of Rousseau’s views while simultaneously reacting against others. This complex blend of influence and reaction renders Smith and Rousseau a subject ripe for further exploration.