Death and the Weather

Death and the Weather

One of the chief differences between the annual reports of the Registrars General of Scotland and of England between the 1850s and the 1920s was the amount of space that each devoted to the weather.

The idea that health and climate are closely related is a very old one, going back at least as far as the Greek physician Hippocrates.  Invalids who could afford it were often urged to seek a suitable climate, and by the nineteenth century, the climatic search for health had become international.  Sufferers from tuberculosis, for example, were urged to journey to the South of France, Egypt, or even Australia, in search of better health in a dry climate. 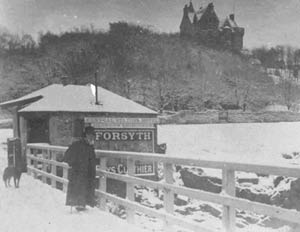 In Scotland, medical theories popularized in the eighteenth century by the eminent Edinburgh physician, William Cullen, stressed that cold was a predisposing cause of disease.  James Stark, the first Superintendent of Statistics at the General Register Office for Scotland, believed very strongly in the relationship between health and climate, and he was convinced that if better records of Scottish meteorology were kept, they would offer vital clues to this relationship.

(Image: Cove pier under snow, from the James Paterson Collection, by permission of Glasgow University Library, Department of Special Collections.)

In England, the Royal Society received a government grant to encourage meteorological reporting and research.  It worked closely with the Navy, which had a long-standing interest in such meteorological features as winds and currents.  A number of weather stations were set up, which reported to the Meteorological Office in London.  The Registrar General for England and Wales produced a summary of these reports, mainly in his quarterly returns, and a shorter one in his annual report, but did not comment on them in any detail.

Stark formed an important link between medicine and meteorology in Scotland.  The Scottish Meteorological Society was founded in 1855, the same year that civil registration began in Scotland.  The Society had some prestigious supporters, particularly amongst the great landowners, who had an interest in recording the weather for agricultural purposes.  James Stark was appointed as secretary to the new Society, and produced its annual reports for a short period until problems with his health, and pressure of work in the GROS, forced him to give this up.  But his reports for the GROS continued to draw heavily on the work of the Society. 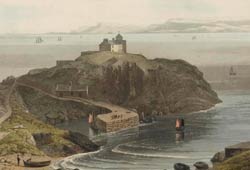 (Image: 'Light House on the Isle of Scalpa, Harris', by permission of Glasgow University Library, Department of Special Collections.)

Scottish weather reporting therefore relied on a network of private and volunteer bodies.  By the late 1870s, the 'official' stations, which were predominantly in the Scottish lighthouses, were supplemented by 55 amateur weather stations.  The latter were mainly supported by the gentry, who usually asked their gardeners to record the weather, and by volunteers such as schoolmasters, who got their classes to participate.  As in England, the reports included high, low and mean temperatures, a comparison with the mean of the previous 20 years, humidity, pressure, wind, rainfall, hours of sunshine and a general comment on each day's weather.  The English reports gave the amount of positive and negative electricity in the atmosphere.  The Scottish reports did not run to this, but did include underground temperature, the temperature of wells and springs, the temperature at the coast, and records of thunder, lightning and auroras.  Stark's own quarterly reports included much detail from these local observers, some of it quite poetical, as in this account of the mild January of 1858:

'At Aberdeen the hazel and snow-drop were in flower on the 25th, and at Banchory House the rhododendron ponticum was in flower on the 29th.  The thrush was often heard singing during the month at Scourie, and the lark at Aberdeen.'

Relations between the Registrars General for Scotland and the Scottish Meteorological Society remained close, and in 1912, James Craufurd Dunlop was permitted to pay the Society in return for the weather information they provided.  Dunlop was committed to keeping weather as part of his statistical returns for Scotland, but for different reasons from Stark's.  By this time, the causes of disease were better known, and weather featured less prominently in medical thinking, but Dunlop argued that the Registrar General had a duty to keep on reporting the Scottish weather, as it was not adequately done anywhere else.  In return for government funding, the Scottish Meteorological Society had to agree to liaise with a branch of the Meteorological Office set up in Edinburgh.  The needs of warfare provided a great stimulus to weather reporting, and in 1921 the Meteorological Office, via its Edinburgh branch, took over the reporting that had previously been done by the private Society.  At this point the British weather was effectively 'nationalized'.

Weather continued to feature heavily in the reports of the Registrar General for Scotland until Dunlop's retirement in the 1930s.  The Registrar General for England had already given up on weather reporting, arguing that it was most effectively done by the Meteorological Office.  But the relationship between health and weather still creates interest.  In 2002, the Registrar General for Scotland sponsored a report on excess winter deaths (available online).  Excess mortality in Britain is higher than in other Northern European countries, and an explanation for this is sought, though the poor standards of much British housing is suspected to be the main cause.  Stark would also be gratified to know that research is still ongoing over whether the mortality rates in the West of Scotland, which compare unfavourably to those of the rest of the country, can be partly attributed to the particularly dreary climate of this part of the world.