University of Glasgow’s School of Psychology alumna Moa Schafer has been shortlisted as a finalist at the British Education Awards 2020 in recognition of her outstanding academic results and extracurricular success. 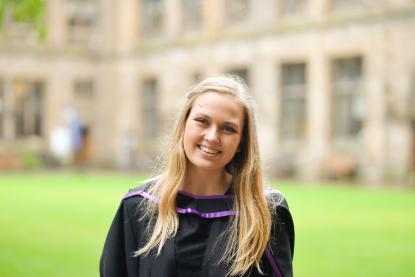 Moa, who has been shortlisted within the ‘Degree’ category, graduated from the University of Glasgow with a first-class joint honours degree in Psychology and Business and Management in 2019.

The British Education Awards distinguishes and celebrates individuals who have demonstrated excellence in the British education system and the award highlights how success comes down to personal endeavour and engagement.

During her time at the University of Glasgow, Moa was acknowledged as one of the most disguised first-class students in Psychology and was nominated by the School of Psychology as the most outstanding graduate in the College of Social Science.

Alongside her studies, Moa held various leadership positions in a number of societies, projects, and fundraisers. One of the stand-out contributions during her undergraduate degree was her head shave cancer fundraiser. Moa pledged that if she raised £1,000 for cancer research, she would shave off her 57cm long hair and donate it to a charity that makes wigs for children with chronic hair loss. By the end, she had doubled her initial target - raising a total of £2,296 in just a month. The fundraiser also led to Moa being recognised as one of the University of Glasgow’s official ‘World Changers’.

This year’s British Education Awards ceremony will be held in Manchester on the 30th January 2020.