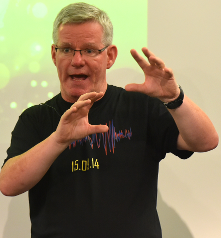 Martin Hendry is Professor of Gravitational Astrophysics and Cosmology and since 2012 has been Head of the School of Physics and Astronomy – having previously (2008-2012) been Convenor of Learning and Teaching for the School.  For many years Martin has had a strong interest in physics and astronomy education, both formal and informal, and public outreach.  Between 2010-2012 he was a Science and Society Fellow for the Science and Technology Facitilies Council, leading an international programme of schools and public outreach activities entitled “Exploring the Dark Side of the Universe”.  He currently chairs the Education and Public Outreach Group of the LIGO Scientific Collaboration and co-chairs the Advocacy and Outreach Group of the LISA consortium; through these roles he seeks to coordinate and champion across the international research community the development of educational resources in the nascent field of gravitational-wave astrophysics.

Martin’s interests in high school education are also extensive.  In 2010 he was invited by Education Scotland and the Scottish Qualifications Authority to join the advisory group that oversaw the redesign of the physics curriculum for the senior phase of the Curriculum for Excellence – and through this role he has helped to embed a wide range of new material on astrophysics, cosmology, relativity, particle physics and quantum physics in the Higher and Advanced Higher Physics syllabus in Scotland.  He regularly gives physics and astronomy presentations to high school students throughout Scotland (annually talking to more than 1000 Higher and Advanced Higher Physics students across the country).  In the past few years he has also taken part in many international workshops, conferences and festivals on science education, in Germany, Canada, Austria, Norway, Malaysia, Croatia, Australia, China, Oman and the US.  He is a founder member of the international “Einstein First” collaboration (https://www.einsteinianphysics.com/) and co-Investigator in the international Einstein First project funded by the Australian Research Council and led by the University of Western Australia.