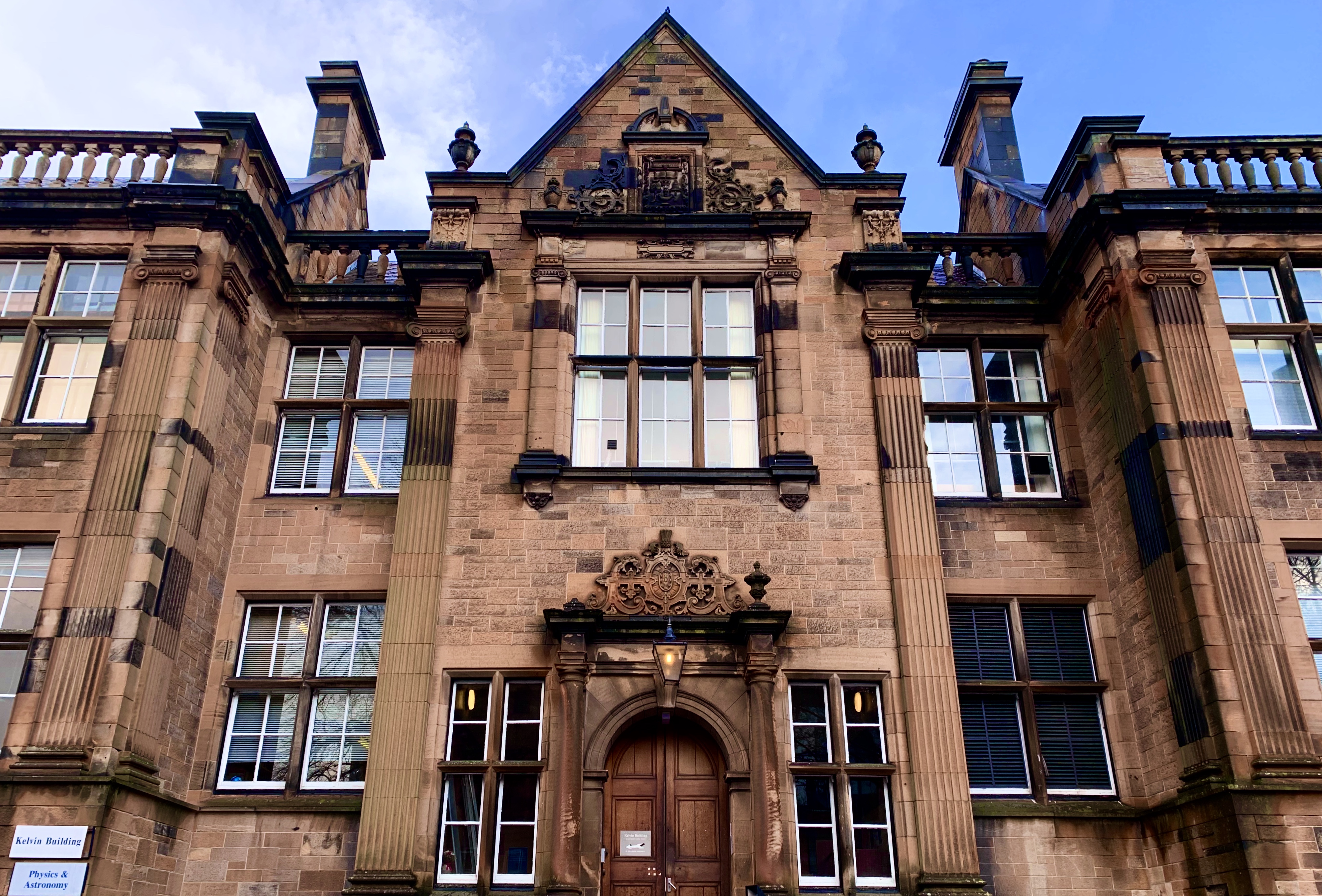 The Kelvin Building, originally known as the Natural Philosophy Building, was named after Lord Kelvin and was designed by Scottish architect James Miller.

The building was completed in 1906 and was formally opened by the Prince and Princess of Wales on 23 April 1907.

The history of the Kelvin Building

The building, along with the West Medical Building, was funded through the quinquennial grant programme of the Carnegie Trust for the Universities of Scotland, which awarded £20,000 to each building. The remainder of the funding came from the University's Ninth Jubilee Appeal of 1901.

The Kelvin Building and the West Medical Building were constructed of Giffnock sandstone to match the main buildings and roofed with blue Westmoreland slates. Internally, the fittings were made of high-quality exotic timbers, such as Kauri pine from New Zealand, teak and mahogany. A novel feature of both buildings was the 'Nuvacuumette' vacuum steam heating system supplied by Ashwell & Nesbit of Leicester. The company advertised that the benefits of the system were its controllability, efficiency, economy; and that 'rooms warmed by it do not become stuffy, the heat given off being mild and pleasant.'

The Kelvin Building has a Renaissance-influence design and near-symmetrical courtyard plan.

The decorative entrance and window pediments are intended to evoke the Old College buildings in the High Street. The internal spaces were fairly basic in their finishing - a higher level of decoration was allowed for the public spaces and fitting of the professors' rooms. The corridor was floored with 'terrazzo,' a composite material resembling marble chips, and lined with white and yellow glazed tiles. Structural steelwork was left visible in places, especially in the roof of the main lecture theatre.

Notably, provisions of both male and female cloakrooms were made from the outset. The Kelvin Building was also the first building at Gilmorehill to be equipped with the American Electric Utilities Company's 'Metaphone' system, an internal telephone network that could operate without a central switchboard.

(All Information for this article was extracted from: The University of Glasgow Story http://universitystory.gla.ac.uk/)

The building has undergone many alterations and reconfigurations over the years. In 1921-1922, James Miller added another laboratory to the north of the building. By the mid-1940s the Principal, Sir Hector Hetherington, was determined to establish the Natural Philosophy Department as one of the pre-eminent Physics departments in the UK. As part of the project, Basil Spence & Partners designed an extension to the original 1907 building. The first phase, 1947-1952, consisted of the new building with a lecture room and purpose-built accommodation for the synchrotron particle accelerator, an important piece of equipment used in the study of particle physics. The second phase provided teaching laboratories and another lecture theatre, and was completed in 1959.

Basil Spence, Glover & Ferguson were responsible for a third phase in 1966. The new extension included a library and a museum on the top floor, the latter displaying historical equipment from Lord Kelvin's old laboratory. A new floor divided the 2-storey main lecture theatre in 1991.