A new agreement for nursing student exchange was formalised in a signing ceremony in Japan last week. The photo shows Professor Hayakawa, President of the Mie Prefectural College of Nursing and Margaret Sneddon, Head of Nursing & Health Care School in the process of signing the agreement. Also present was Deputy Governor Ueda of Mie Prefectural. In his speech he congratulated both institutions and expressed his hopes for a very fruitful partnership and that “both universities can greatly broaden their vision in several areas, including culture, the state of healthcare and practical nursing”. He thanked Assoc. Professor Margaret Sneddon and Mr Graham MacIntosh for travelling to Japan and for their efforts in bringing about the agreements saying  how pleased he was to attain an agreement with the University of Glasgow, as a top-level British Institution, top for Nursing and also affiliated with a highly regarded hospital.

The Mie College of Nursing was established in 1997 as the first nursing university in Mie Prefectural and a nucleus for nursing education and research. It has an intake of 100 students per year to their 4-year programme. The facilities are superb. Margaret and Graham were able to see some of the clinical areas to be visited by Glasgow students and have no doubt that they will have a great experience and be warmly welcomed. The first Glasgow students will go to Japan in June 2016. Shortly before this, in May, Mie Prefectural will host the 2016 G8 Summit.  The first Mie prefectural students will come to Glasgow in September /October 2016. 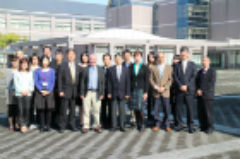