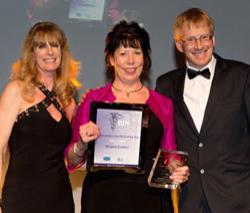 Margaret has been Head of the University’s acclaimed Nursing & Health Care School for seven years and is highly regarded in the field of lymphoedema care. She was Vice Chair of the British Lymphology Society for five years and set up the longest running accredited education programme in lymphoedema for nurses and allied health professionals in Lymphoedema.  She is currently a director of the International Lymphoedema Framework organisation, which seeks to improve the management of lymphoedema worldwide and co-chairs the charity’s education committee.

The British Journal of Nursing Awards 2014 were presented by comedian, commentator and GP Dr Phil Hammond at The Swan Underglobe in London. This latest award follows hot on the heels of an ‘Outstanding Contribution to Teaching’ award, reported in the last edition of Campus eNews, which the School’s Lymphoedema team Rhian Noble-Jones and Yolande Borthwick plus Margaret received from the University’s Student Representative Council following a nomination from current students, reflecting the outstanding reputation which the School enjoys in the field of Lymphoedema care.

On accepting her award, Margaret Sneddon said: “It is fantastic for this award to come to the University of Glasgow, which has been at the forefront of lymphoedema education for the past twenty years and trained a large proportion of specialists practicing across the UK and beyond. Lymphoedema is much more common that is generally thought and not everyone with the condition gets appropriate care.

"However things are improving, thanks to the hard work of many people, I have probably been doing it for longer than most! It comes at a very exciting time as the new government report Lymphoedema Care In Scotland: Achieving Equity and Quality, with Which I am pleased to have been involved, has recently been released  and this has the potential to make a real difference to people with lymphoedema."

The University of Glasgow hosted the International Lymphoedema Framework Conference on 5-7th June.