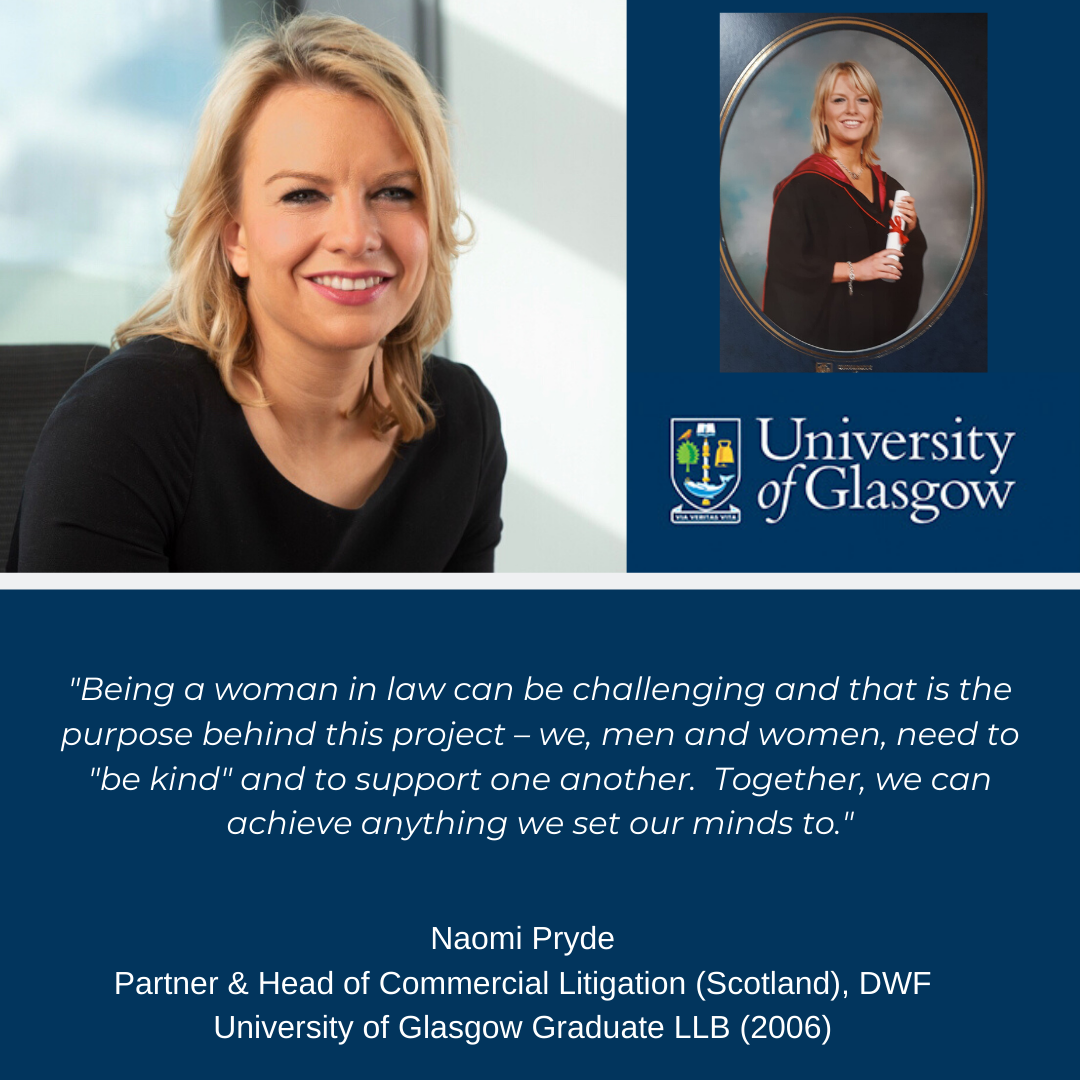 It’s a famous maxim, from a famous feminist, and its message has never been more relevant.

In the hundred years since women were first able to practice law, much has been achieved. It’s come to a point where there are now more women entering the profession than there are men; but that’s not to say that there aren’t still challenges.

And these challenges demand our courage – for ourselves, for our peers and for those who follow.

My step of courage is to share my story of getting to where I am now, and of my hopes for what’s yet to come.

I’m the product of a working class family, heralding from a long line of hard-working farmers, builders and miners. I was fortunate to attend private school as a result of scholarships and some “ducking and diving” on my parents’ part. To be honest, it wasn’t as plain-sailing as I’d hoped it might be: due to the “rough” area I lived in and the “posh” school I attended, I never felt I fitted in at either. I was mercilessly bullied by a group of girls in my class at school, chased daily by local kids on the way home from school due to my uniform and home life wasn’t much easier.

My mum brought-up me and my sister with the devoted assistance of my gran. My father was not a nice man and his ultimate departure served only as a relief, notwithstanding the fact it also left us homeless. When I did my higher exams, I was sleeping on the floor of one of my mum’s friends. It wasn’t easy, but we persevered.

My mum and gran taught me to fight for what mattered to me – and core to that was a desperate desire to make a difference, and to ‘keep going' irrespective of any challenges that stood in my way. I’d wanted to be a lawyer since I was eight years old, and nothing and no one was going to stop me from getting there. By the time I was 15, I knew that I wanted to be a litigator, and I focused all of my energy on getting there.

It came time to have a week’s work experience, and I diligently wrote to every large and medium sized, and even a few small, commercial firms in Edinburgh. I did not receive so much as an acknowledgment from a single one of the firms. Frustrated and somewhat disheartened, I recounted my efforts to a school friend. Without my knowing, she called a friend of hers – whose mother happened to be a partner in a large Edinburgh firm – and lo and behold, within five minutes I had my work experience confirmed.

While I am immensely grateful to all of them, I was struck by how unfair it was that I got this opportunity the way I did; it was my first, and only, experience of nepotism. So, as an ambitious – if clueless! – 15 year old, I determined that I wouldn’t leave my future career to such chance, and have since worked on developing a strong network of my own, and of sharing my access to law with others.

After graduating from the University of Glasgow, which I chose because it offered the opportunity to study abroad for a year, during which I went to Lewis & Clark Law School in Portland, Oregon, which was the best experience of my four-year degree, I did my diploma at Edinburgh University. The diploma is not means tested and despite working almost full time hours in a bar to support myself whilst studying, I had to take out an eye watering loan in order to afford the course fees. I've worked since I was 14 years old and I've been financially independent since then. The level of debt I found myself in at the age of 21, accrued in order to achieve my ambition of becoming a lawyer, frightened me. When I was in a position to do so, I wanted to make an effort to mitigate the impact of the financial strain on others entering the profession.

The Lawscot foundation, of which I am a founding council member, seeks to do just that. We provided financial support to academically talented students from less advantaged backgrounds to help them access the profession. But we know that the barriers aren’t just financial, and so we also provide mentoring and other support.

I’ve worked in a range of firms: for the first seven years in a Scottish firm, where I trained and qualified, and then in London where I spent the following five years before returning to Edinburgh.

London lawyer life was extraordinary, but in both good and harder ways. The work was exciting and challenging, the clients were large multinationals and my colleagues amongst the best in the business. But I worked hard. There were times when I felt like all I did was work and sleep, and I pushed myself to my limits. And, because I had so much debt from my education, and because London is inordinately expensive, there were days when I was so skint I couldn’t afford to eat. On the plus side, my CPD record and my network really benefitted - there wasn’t an event I wouldn’t attend in exchange for a canapé or two and a glass of wine!

At 33, I finally paid off my student debt, and felt like I’d achieved the impossible!

I'm now back in Scotland and I'm a partner in a brilliant firm, leading an exceptional team, doing what I love. But is it all rosy? In a word: no.

I still find myself falling prey to unconscious bias, from women as well as men! When I walk into a room with a – younger – male colleague, nine times out of 10 people will assume that he is the partner, and I’m the associate. And people have point-blank asked me whether I got my job because of a quota or positive discrimination, or because of what I look like, an experience to which I imagine few white, CIS-gendered men can relate!

All too often, women are seen and portrayed as the more vulnerable, the weaker, the ‘other’ in need of saving. It won’t surprise you that I’ve no time for that, and that I’ve taken action to reduce the impact on my nieces of that messaging. They love princess stories, and I love them – so I’ve written a children’s book, ‘The Princess who saved herself’, to encourage them to own their own courage, to fight for themselves, and not to wait for anyone else to come along and save them.

We have to be the change we want to see in the world, and that’s what I try to do every day, whether in small ways or larger ones. I mentor several young women in law, and I do my best to champion others, because this stuff matters.

I actively encourage law firms, including my own, to look at how they measure performance and reward. We know that women are more likely to under record their hours and write-off time, and research suggests it’s often because women undervalue themselves and thus are less willing to charge for the time they have legitimately spent working on something. Women are more likely to undersell themselves in their business cases for promotion. Women are less likely to ask for pay-rises or promotions in the first place. Women also tend to still take on the bulk of the childcare and household responsibilities, irrespective of whether they are the "breadwinner" (see the recent reports about the split of "domestic work" during Covid-19). Women also tend to do more CSR, mentoring and pro bono activities. Exceptionally valuable and important, but next to impossible to measure on a spreadsheet. Why do many law firms still continue to measure performance, and reward, without taking all of that into account?

As for the future, that’s where my courage needs a little push. I’m pregnant with my first child, a little boy. I can't wait to be a mum but I do wonder what that will mean for my career which has, to date, been my "baby". There is a lot of pressure on women to "have it all" and I'm already apprehensive about taking some "time out". Being a woman in law can be challenging and that is the purpose behind this project – we, men and women, need to "be kind" and to support one another. Together, we can achieve anything we set our minds to. So here's to that, and here's to the next 100 years!