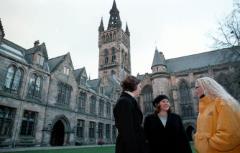 Brief descriptions of the courses are available below; the links to the right will take you to the individual course webpages.

In Level 2 and thinking of Honours? Details of the application process can be found here.

Philosophy 1A: How Should I Think?

Philosophy 1A: How Should I Think?

Each of us possesses the ability to think. That is, we can formulate ideas, infer, and make judgments about ourselves and the world around us. Indeed, a recurring theme in the history of philosophy is that thinking is a defining characteristic of human beings.

Being good at thinking is very important. For instance, someone who thinks well will be more likely come to possess knowledge about the world. As a result, this will improve their chances of achieving their aims. By contrast, a bad thinker will tend to end up with false and distorted beliefs, and will consequently face greater obstacles in attaining their goals.

Despite its significance for us, we don’t always think as well as we could or should. It is widely known that when are thinking we are all prone to multiple kinds of bias and fallacy. As a result, we end up missing out on opportunities to gain knowledge about the world, which in turn, has significant implications for how our lives go.

Thus, it seems important to ask: how should I think? The general answer that we consider in this course – and of relevant to doing philosophy more generally – is that we should think critically. Roughly this involves making judgments only on the basis of good reasons. By doing this, we avoid bias and fallacy, and improve our chances of gaining knowledge about ourselves and the world we inhabit.

The course is split into four sections.

In the first part  we ask: how do I think critically? We approach this by focusing primarily on arguments, which are defined as attempts to establish a conclusion by providing reasons for it. Specifically, we work on improving your ability to identify and evaluate arguments, drawing on examples from philosophy and popular media. As a result, you will become better at judging on the basis of good reasons.

In the second part of the course we ask: how do I think critically about what matters? That is, we apply critical thinking skills to practical issues of profound significance for our lives. Specifically, we think critically about issues in contemporary moral philosophy. Possible topics covered include (but are not limited to): abortion, animal rights, euthanasia, and obligations to future generations.

In the third part we ask: how do I think formally? Here we approach the general question of how we should think from the perspective of formal logic. As in the first part of the course, we are interested in arguments, and distinguishing good ones from bad. It turns out that, in many cases, this is a matter of examining the structure of an argument; the aim of formal logic is to study this structure in isolation, thereby giving us some powerful tools for use in classifying arguments, and for aiding us in becoming better critical thinkers.

Finally, we ask: how do I get knowledge? Here we consider some basic issues in epistemology (the study of knowledge), focusing on competing accounts of how we acquire knowledge about ourselves and the world around us. This involves both applying and developing the critical thinking skills gained in the earlier parts of the course. Possible topics covered include (but are not limited to): scepticism, rationalism, and empiricism.

Philosophy 1B: How Should I Live?

Philosophy 1B: How Should I Live?

Our lives are filled with choices. We choose what to eat, what to buy, with whom to spend time, which career to pursue, and much more. Some of the choices we make don’t matter much, whereas others matter a great deal. Many of our life decisions apparently matter because they have moral significance; most of us think that there are some things that are morally wrong for us to do and others that we are morally required to do.

We do not live our lives in isolation: we live together in society. The societies we live in have a major impact on which life choices are available and to which individuals. Many of the choices we have to make about how to live together are apparently morally significant; most of think that some ways of arranging society are morally better than others.

The many choices we make as individuals and together in society work together to shape our lives—but we may not have done much critical thinking about how we should be living. What’s the best life to live? Is it the moral life? The happy life? Something else? And what’s the best way for us to arrange our lives together? One reason to think that answers to these questions are important is because our lives matter. But why do we think that? What makes life meaningful or significant?

In this course, we’ll begin to think critically about how we should live and why our lives matter. This will not only help us figure out what our values should be, but it can help us live our lives and arrange our societies in ways that reflect those values.

The course is split into four sections.

In the first part, we ask: why be good? We might think it’s obvious that we should at least try to live a morally good life. But being moral might seem to sometimes get in the way of our pursuing other things we want or value. If that happens, should we prioritise morality? Why not just live however we want, as long as we can get away with it? In this section of the course, we’ll begin to consider why and whether we should be good.

In the second part, we ask: what is good? When thinking about whether to be good, we’ll have taken it as obvious that some things are good and bad. We also probably think it’s obvious that some things are right and wrong. But what makes things right and wrong or good and bad? And if we don´t know, how can we be sure about which things are which? In this section of the course, we’ll begin to consider the nature of these values.

In the third part, we ask: how should we live together? As individuals, we are likely to disagree about the best kind of life to lead, which things are valuable, and what makes things valuable. But, if we disagree: who gets to decide how we should live together? Typically, we at least partially settle this question by appealing to a state which sets limits on some of the thing we can do and ensures that at least some things are available to everyone. In this section of the course, we’ll consider what, if anything, we owe to the state and what it owes to us.

In the fourth part, we ask: what is the meaning of life? Answers to questions about how we should live as individuals and together in society may only seem to matter if we assume that our lives matter. And we usually do; we generally assume that our lives are meaningful and significant. But what makes a life valuable? In this final section of the course we’ll look directly at this broad question. In particular, we’ll consider when a life is a good life and the related question of when, if ever, a death is a good death.

Philosophy 2A: What Am I?

Philosophy 2A: What Am I?

One thing that is special about you is that, unlike rocks and trees, you have a mind. Your mind is the thing that makes you capable, among other things, of thinking, feeling, and experiencing. Our thoughts, feelings, and experiences are clearly central to who we are. But what might your mind be such that it has these distinctive features? Is it simply a very powerful computer: your brain? Or are there things that your mind can do that a computer could not? Is your mind something more than your physical brain or nervous system?

Another striking feature of you is that you seem to be able to freely decide how to act. Indeed, it seems that there’s an important sense in which it’s “up to you” whether or not to take this course. Our capacity to act freely is an extremely important part of who we are. Without it, it’s hard to see how we could ever be held responsible for our actions. But given that we are embodied creatures made up of physical particles, and given that physical things seem governed by physical laws, how can we ever act freely? Is freedom compatible with our physical nature? Or does freedom require that you are not simply a physical being?

What we think and feel, and how we act, brings about changes to world around us, and to ourselves. You don’t think and care about the same things that you did five or ten years ago, and you don’t do the same things, either! But although we undoubtedly change throughout our lives, we also seem to persist over time. When you look at photographs of yourself as a child, you have no hesitation to identify the person as you, despite the profound changes you have undergone. But what makes you and the person in the photo one and the same? If you are just your mind, and your mind is completely different, are you really still you? Not only your mind, but your body is very different. The physical particles that make you up have almost all changed and eventually your body will expire. Are you the sort of thing that could persist beyond bodily death? What makes and keeps you you despite all these changes?

Whatever we are, we don’t exist in isolation. Our identity isn’t limited to the particular things which make us individuals, but seems to include at least some of the groups to which we belong. We seem to belong to many wider groups including gender, race, class, and nationality, Group membership, for many people, is a fundamental part of their self identity. For all of us, group membership affects our thoughts, feelings, and actions. The relationships between our self-identities and our group memberships have important moral and political implications. Is our membership in these groups part of what makes us who we are? Are you really part of something bigger than yourself?

In this course, you will be considering these questions as part of answering and thinking critically about the broad question: what am I? Answering this is fundamental to understanding yourself and your place in the world.

Philosophy 2B: What Is There?

Philosophy 2B: What Is There?

This course will introduce students to core philosophical issues concerning the nature of reality. We will explore core issues in formal logic, metaphysics, philosophy of religion and philosophy of science, focussing on the questions of what kinds of things can be said to exist.

Each section of the course will address a key philosophical question: How do we think formally about existence? will introduce students to formal methods for engaging with questions about existence and quantification. In What exists? students will consider core metaphysical issues concerning the fundamental constituents of reality. Is there a God? will address issues concerning whether we have reason to believe that anything beyond the physical exists, specifically a divine being. Relatedly, the final section Does science reveal everything?,  will discuss issues concerning the scope and aims of science, with a particular focus on whether or not science aims to give us an exhaustive account of the nature and content of reality.