Michael Thomas Clanchy died of a stroke on 29 January having caught COVID from an end of life visit to his wife, Joan, who had passed away just two weeks earlier. Michael was a lecturer at Glasgow from 1964 to 1985, becoming a Reader in 1982, before moving to the Institute of Historical Research in London. His imaginative vision of the past and methodological sophistication in analysing it were supported by his mastery of the rigorous skills of medievalists' scholarship. He was elected a Fellow of the British Academy in 1999. 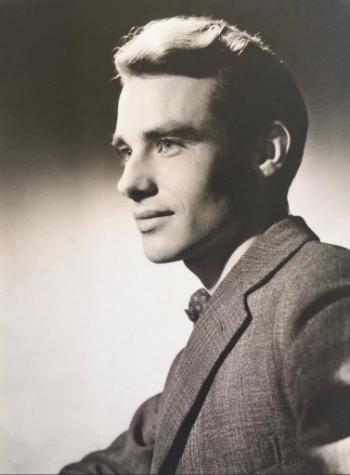 Born in 1936, Michael was an undergraduate at Merton College, Oxford where he studied under R. H. C. Davis and began his doctorate part-time at the University of Reading, while a schoolteacher. His field was administrative history and among his early publications were a short note in the English Historical Review on Clause 34 of Magna Carta (1964) and an article on ‘The franchise of return of writs’ (TRHS, 1967) which won the Royal Historical Society’s Alexander Prize in 1966. His 1970 article in History on ‘Remembering the past and the good old law’ gave some clue as to the direction in which his mind was travelling, referencing as it did, anthropologists and Balkan minstrels in its attempt to differentiate oral and written culture. However, few were prepared for the extraordinary re-writing of English administrative history which was From Memory to Written Record which first appeared in 1979.

In his first book, Clanchy took insights from anthropology and psychology and applied them to the revered canon of scholarship on English governmental development between 1066 and 1307. The introduction was wide ranging and iconoclastic focusing on getting the reader to lose old assumptions: the crucial differences between reading and writing: signing with a cross only became the mark of illiteracy in a secular society, before then it was the most solemn symbol of Christian truth, a reader might apply it as more trustworthy than a personal signature. Rural societies like Iceland were often more literate than urban ones, because scattered populations could not rely on oral communications to assemblies of people as happened in towns. Because literacy was most commonly a question of personal salvation through prayer, rather than administration, its vehicle was often mothers teaching children rather than the more studied formal schooling in histories of education.

Clanchy explained that the title of the book was taken from H. J. Chaytor’s, From Script to Print : acknowledging the influence of a literary historian from the previous generation, but it also marked the incorporation into English historiography of some of Marc Bloch’s ideas about the primacy of memory and visual culture in medieval society as expounded in his Feudal Society. These more imaginative approaches applied by European historians had always been kept at one remove by the sheer weight of written evidence and government record in medieval England in comparison to its neighbours. The book also demonstrated the rich intellectual culture of the medievalists at Glasgow at that time. In the Preface to the first edition he thanks Peter Davies (who died in November), John Thomson and Patrick Wormald as well as thanking John Thomson’s wife, Katie of the Dictionary of Medieval Latin from British Sources for her advice ‘about the history of certain words, notably rotulus’.

From Memory to Written Record ran to three editions, one fewer than his next book which first appeared in 1983: England and its Rulers, 1066-1272. Although this was a textbook on English history it marked another stage in Clanchy’s project to remind readers of England’s indissoluble connections with the rest of Europe. Its rulers were aware of their position at the edge of the world and for that reason were constantly drawn to its centre which was Jerusalem or perhaps less fancifully, Rome, through their involvement in European politics. With that in mind, the fact that it is one of the few textbooks on English history not to feature any maps of England , only ones of Europe, becomes more explicable.

Michael also gave us Peter Abelard: a medieval life (1997) and his combination of human sympathy and penetrating intellect made this an outstanding introduction to the life and work of a difficult man. He was also able to produce a revised edition of Betty Radice’s Letters of Abelard and Heloise (2003). Both books are a testament to how his commitment to teaching fed into his research. The former was dedicated to 'my students of the Abelard Special Subject Class, Glasgow 1970-1985' and the latter came about because he felt that Radice’s literary translation did not do justice to the precision of Abelard’s philosophy. The quotations from W.H. Auden and Cole Porter in a biography of Peter Abelard were typical of his teaching style.

Finally, he turned back to the problem of women and literacy which he had touched upon in FMTWR and published six related essays as Looking back from the invention of printing : mothers and the teaching of reading in the Middle Ages which appeared in 2018. His son, James, recalls that Michael had sketched out a plan for a book on women and reading in the early 1980s, so it is true to say that all his books were written or conceived in Glasgow. They are all still in print.

Michael had family connections in Glasgow, Joan was Glaswegian, and he returned several times to give papers, always taking an interest in the research of both students and staff. He was unfailingly encouraging, generous and insightful. He also told stories of the Glasgow University History Dept. in 1960s and 70s which reminded most of the present incumbents that they had in fact, lived quite sheltered lives and that by and large, this was a good thing.

In his last years he struggled with Parkinson’s disease and cancer. The announcement of his death by his daughter, Kate, on Twitter was received with an outpouring of grief, not just from colleagues, friends and former students, but also publishers and readers inspired by his work. It was good to see not only his brilliance, but the many aspects of his kindness being celebrated.

*With thanks to James and Kate Clanchy for their help.