An interdisciplinary group of scientists, artists, and archaeologists led by Dr Nicki Whitehouse (Archaeology, UoG) and Prof Clare Willsdon (History of Art, UoG) has come together to share common perspectives around the scientific and cultural value of wetlands and peatlands. The group has been set up following the successful initiative of the Bright Edge Deep online exhibition, hosted at UoG as part of COP26 activities.

The group project, “Integrated approaches towards understanding the scientific and cultural value of wetlands and especially peatlands for climate mitigation” (NERC/University of Glasgow), travelled to Edinburgh on May 17th to visit several National Galleries Scotland sites, and speak to curatorial staff. The workshop was led by Prof Clare Willsdon and Dr Freya Spoor, NGS Curator to examine depictions of wetlands and peatlands in art and photography.

The group first met with Freya Spoor, NGS Curator, at the Granton Art Centre, to examine paintings held in the store there. 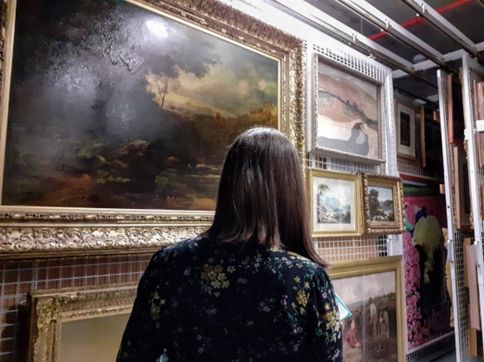 Freya had selected a variety of images for the participants to view; some abstract, some of beautiful, open landscapes, and some of more naturalist origins – including a family working on the moors. There were varying themes highlighted within each painting; some, especially from the nineteenth century, were depicted in a way that gave the impression that the Scottish landscape was wild, empty, archaic, and wholly romantic. This can be seen in William Dyce’s View of Loch Lomond – with a fantastic amount of detail, the image represents an almost hyper-realistic capture of a moment in time. So realistic, in fact, that specific locations within Dyce’s works can be identified today, and the NGS has been able to revise the title of the Dyce painting in the light of a site identification exercise with members of the public. 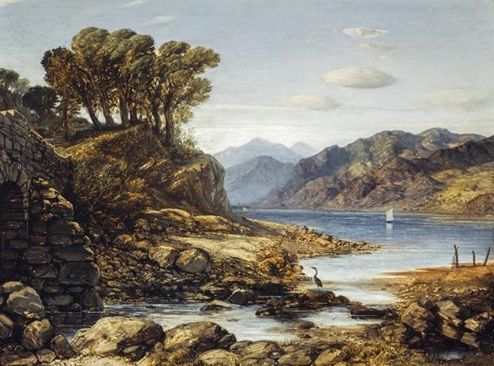 This façade of the wild and romantic often obscures the fact that the peatland or wetland portrayed arises from human activity, as when moorland resulted from sheep-grazing after the Highland Clearances. Curators, throughout the day, had a difficult time finding dedicated depictions of wetlands and peatlands as these are very often not the named or given subject of an artistic work, but rather inherent to the site portrayed – though not necessarily recognised or understood as such by the artist and/or the original viewers. Bringing the expertise of other disciplines to bear on paintings can thus illuminate the work of a curator or an art historian, just as appreciation of cultural and historical aspects of a landscape can inform policy decisions about its conservation today. 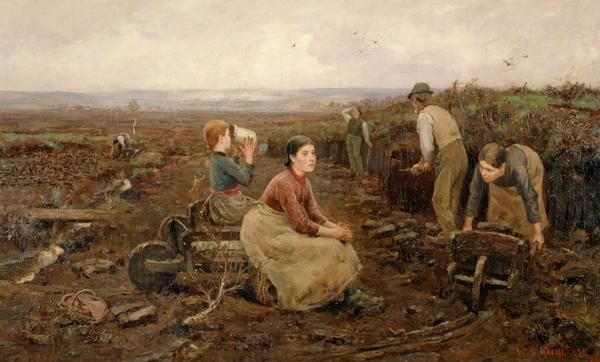 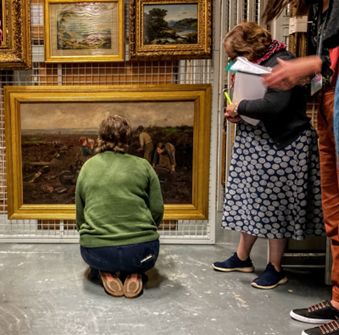 Other depictions of peatlands and wetlands focused on a more realistic view of the landscape, as seen in William Stewart MacGeorges’s A Galloway Peat Moss, which emphasised the human element to an underrepresented landscape that has a complex social history, largely hidden today.

The group moved on to Modern One / Modern Two Galleries, heading over to the Print Room at Mod One to look at works on paper. The NGS work on paper curators Charlotte Topsfield and Hannah Brocklehurst facilitated, giving key insights into how the images were searched and organised by the Galleries, and the subject matter and artists involved. Again, it was clear that many artists had not necessarily set out to represent peatland/wetland motifs as such but did so as part of recording or commenting on ways of living in the wider landscape, or creating dramatic, symbolic, or historical narratives. By looking at their imagery from different disciplines – from geographical and earth sciences to archaeology and art history – it was possible to understand more fully its period and modern connotations and recognise changes over time in particular peatland and wetland sites. It was also clear that certain artists had (consciously or not) used the physical properties of peatlands as a spur to formal innovation and new ‘ways of looking’. 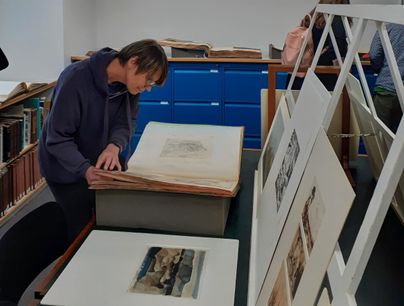 The group then gathered at Modern One for wrap up discussion highlighting the interdisciplinary background of the group. There were discussions on etymology of the word “peatland”, where it is missing in naming traditions, and how differences in the uses of the term can have negative connotations. Further discussion included consideration of the ‘aesthetic’ of peat and the reflective property of wetland, with its pools of water that ‘capture’ the sky. There was also discussion of unnerving lore connected to peatland; the blackness of the water lends itself to folklore, which has translated to many negative connotations for those not living in the space. By contrast, we now regard sustainable peatlands as vital to ecological balance.

The day ended with the NGS photography curators, Louise Pearson and Blake Milateer facilitating a look at peatland and wetland subjects in the photography collection at the Portrait Gallery. The selected photos encompassed several time periods, from more historic depictions of moorland to recent aerial photographs which produced almost abstract depictions of the landscape.

The day prompted new veins of discussion for participants and curators alike, together with renewed vigour for wetlands, peatlands, and their critical role in climate mitigation, water security, and health and wellbeing. The group eagerly awaits the next event: the Loch Lomond Workshops, on June 15th-16th.

If you want to keep up with the project as it progresses, follow along at @HoppingGroup