Dr Matthew Jacobson published a paper in ’Science’ on droughts in Arabia, societal change, and Islam 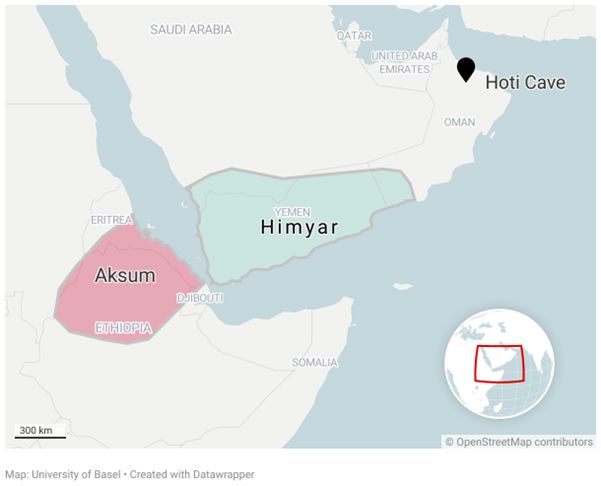 Dr Matthew Jacobson (Lecturer and Research Associate) has had a paper published in the journal Science with international collaborators.

In the article, “Droughts and Societal Change: The Environmental Context for the Emergence of Islam in Late Antique Arabia”, a 2,600-year long record of ancient moisture availability is produced from a stalagmite in Hoti Cave. The most intense dry period was uranium-series dated to the early sixth century CE; this is confirmed by other palaeoclimate records and historical reports to persist from roughly 520-532 CE.

This drought would have had a substantial impact on the ability of the kingdom to grow crops due to their arid location and coincides with wars between the Byzantine and Sasanian Empires, which disrupted Himyar’s trade network, and the invasion of Himyar by the Kingdom of Aksum (Ethiopia). Himyar had withstood similar occurrences in the past, so it seems that the coalescence of all these elements together was the important factor which undermined their resilience, thus leading to their destabilisation. The power vacuum that followed was the ideal environment for a new society to arise and this was eventually filled by the first Islamic Caliphate. The sixth century drought was, of course, not responsible for this, but helped to craft the context within which a new religion and community could emerge.

The research article, published last Friday (17 June 2022), has so far been covered by 39 news outlets, including Forbes, IFLScience and the MailOnline.

The article can be found on the Science website.