A Glasgow stone circle in the midst of the biggest urban construction project in the UK outside of London has recently become the focus of attention for archaeologists – despite being less than three years old.

The Sighthill Stone Circle is overlooked by new flats and neighbourhoods, and sits close to a community campus in the new Sighthill development near the city centre.

The stone circle, constructed in 2019, is itself the new version of the original stone circle that sat nearby between 1979 and 2016.

Author and astronomer Duncan Lunan designed both monuments to align astronomically – the standing stones line up on the movements of the sun, moon and some stars.

The new version of the stone circle uses the stones from the original 70s version with some slight variations to improve how it works. The original stone circle was removed to make way for the Sighthill redevelopment.

Despite not being an ancient monument, archaeologists from the University of Glasgow have been studying the standing stones.

Dr Kenny Brophy and Dr Helen Green of the University of Glasgow, who also spent five years studying the old version of the stone circle and how visitors and the local community used it, lead the latest project to survey the new Sighthill monument. 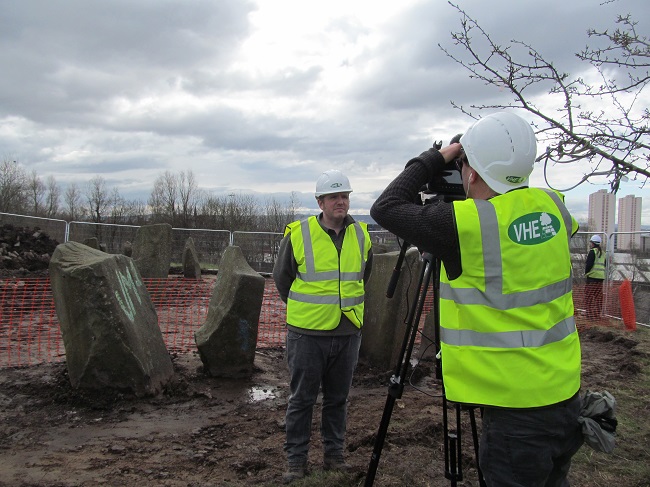 Dr Brophy, Senior Lecturer in Archaeology, said: “Glasgow’s newest stone circle has the potential to be a real focal point for the new community moving into Sighthill. The tangible connection with the old Sighthill is significant, but even more important is the potential for this unique set of standing stones to give character and depth to a new development.

“Standing stones have always been about bringing people together and creating memories, whether were built in 2019BC or AD2019”.

Glasgow City Council arranged for the reconstruction of the new monument in response to a high-profile campaign to save the original stones.

In September last year, University of Glasgow students from the archaeology department carried out two days of survey work at the monument with the permission of developers Morgan Sindall. This included doing a measured survey drawing of the stones, and a photogrammetry survey, which will allow the creation of interactive 3D models of the stones.

The survey work is the first stage in monitoring the ways that people interact with the stone circle as families start to move into the new houses and flats.

Another important aspect of the archaeological work being done here is the creation of an online exhibition called From cooling towers to stone circles: the heritage of Sighthill. This exhibition is a legacy of the the University of Glasgow’s Dear Green Bothy COP26 programme and the Being Human Festival Glasgow Hub.

Created by Dr Brophy and Dr Green, this tells the story of the history of Sighthill from 1900 to 2021, connecting the histories of Pinkston power station, the M8 motorway, Sighthill high-rise flats and cemetery, and the two versions of the stone circle. This resource will, alongside ongoing archaeological work, give a sense of time depth and heritage to those living in the new Sighthill.

Duncan Lunan, who helped with the creation of the exhibition, said: "Dr Brophy's support throughout the campaign to save and rebuild the Sighthill circle has been very helpful and valuable, and I'm looking forward to future developments when the circle reopens to the public."