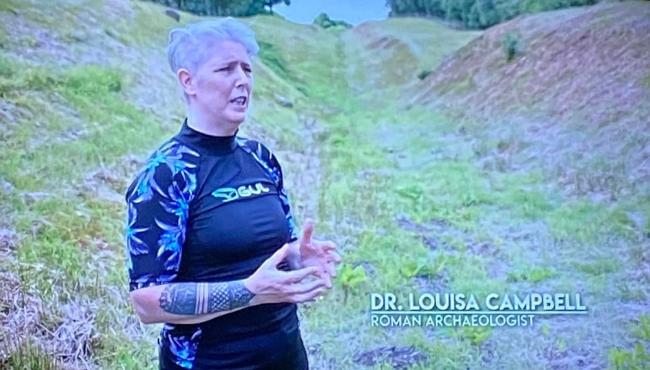 The Great British Dig team recently undertook excavations in the back gardens of Falkirk residents to better understand the layout of Falkirk Roman fort. A team of archaeologists and finds specialists worked closely with the local community to open test pits that revealed Roman artefacts and structural remains. These confirmed occupation during the 2nd Century when this fort was built on the Antonine Wall, the Roman Empire’s most northern – and most complex - frontier and one of Scotland’s six UNESCO World Heritage Sites.

Dr Louisa Campbell contributed expertise on the structural features and strategic significance of the Antonine Wall. She provided a cultural context for the Roman campaigns in Scotland and insights on structures the team could expect to reveal at Falkirk based on extensive excavations at nearby Rough Castle and other Antonine Wall forts.

The programme provided an exceptional opportunity to showcase Scottish archaeology and the exciting results that can be achieved when communities engage with archaeologists to explore their local heritage. This was the first episode of More 4’s second series of The Great British Dig, it aired on Wednesday 29 December 2021 and is accessible on All 4 On Demand.