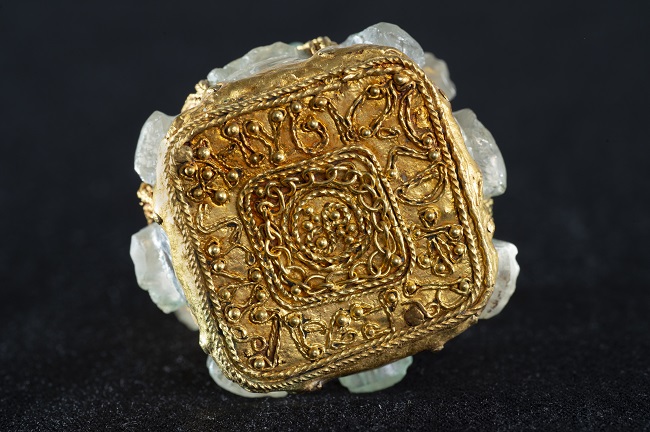 A rare rock crystal jar found wrapped in textiles as part of the Galloway Hoard has been conserved, revealing a Latin inscription written in gold. The inscription says the jar was made for a bishop named Hyguald.

Most of the Galloway Hoard is currently on display at Kirkcudbright Galleries (until 10 July 2022) in a National Museums Scotland touring exhibition supported by the Scottish Government.

However, some material which was wrapped in extremely fragile, rarely surviving textiles, is undergoing careful conservation and meticulous research behind the scenes as part of a three-year, £1million Arts and Humanities Research Council-funded project led by National Museums Scotland in partnership with the University of Glasgow's College of Arts Dr Susanna Harris.

When first removed as a bundle the jar could be only partially glimpsed through its textile wrapping. 3D X-ray imaging produced in partnership with the British Museum allowed the object to be investigated within its wrapping without damaging it. This revealed that the base had an inscription.

The jar, which is around 5cm high and resembles an ornate perfume bottle, is thought to have had an ecclesiastical function. It has now been carefully separated from its wrapping. The Latin inscription on the base, spelled out in gold letters, translates as ‘Bishop Hyguald had me made.’ It is the clearest evidence that some of the material in the hoard may have come from a church in the Anglo-Saxon kingdom of Northumbria, which included Dumfries and Galloway, and stretched as far north as Edinburgh and as far south as Sheffield. 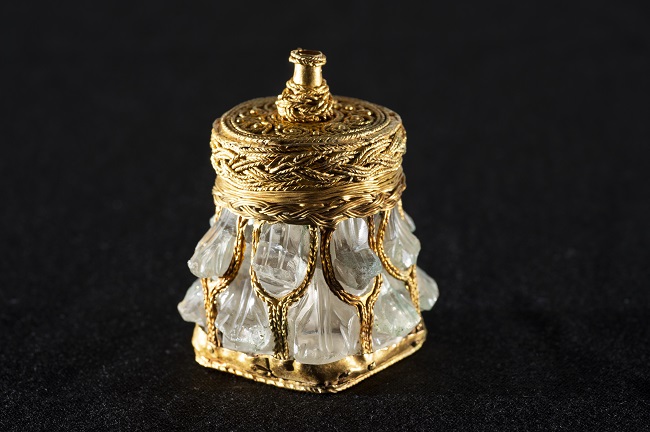 Dr Martin Goldberg, Principal Curator, Medieval Archaeology & History, National Museums Scotland said: “It looks, from the carved surface of the Galloway Hoard rock crystal, that this was once the capital of a Corinthian-style crystal column.  This is unique in early medieval Britain but there are parallels within the Roman Empire for objects of this type. The ones that I have seen are in the Vatican collection, where there are different forms of carved crystal columns.   And so it was maybe 500 years old by the time it was transformed in the late 8th or early 9th century into a gold-wrapped jar.”

The exhibition, Galloway Hoard: Viking-age Treasure runs at Kirkcudbright Galleries until 10 July 2022 and will tour thereafter to Aberdeen Art Gallery (30 July to 23 October 2022). It will be updated as of Monday 20 December with a new film outlining the discovery of the inscription on the rock crystal jar.

The Galloway Hoard is the richest collection of rare and unique Viking-age objects ever found in Britain or Ireland. It was discovered in 2014 and acquired by National Museums Scotland in 2017 with the support of the National Heritage Memorial Fund, Art Fund and the Scottish Government as well as a major public fundraising campaign. Since then, it has been undergoing extensive conservation and research at the National Museums Collection Centre in Edinburgh.

The Galloway Hoard will eventually go on long-term display at the National Museum of Scotland in Edinburgh with a significant and representative portion of it also displayed long-term at Kirkcudbright Galleries.