Rebecca Cleary, a PhD student within the Medical and Industrial Ultrasonics group, was one of four winners, of the Elsevier Ultrasonics RWB Stephens Prize at the International Congress on Ultrasonics in Honolulu. Rebecca’s presentation was titled: “The effect of driving conditions on the performance of an ultrasonic bone biopsy needle” (abstract below).

The International Congress on Ultrasonics (ICU) 2017 was held in Honolulu, Hawaii from the 18th to 20th of December 2017. This Congress brings together multidisciplinary subjects on all aspects of Ultrasonics and will lead us into the future of “Eco-sound”. Elsevier, the publisher of the journal Ultrasonics, sponsors the RWB Stephens Prizes. This competition honours the memory of Professor RWB Stephens (1902-1990) who was active in starting the Ultrasonics International (UI) conferences and who contributed greatly to their success. The prizes are awarded to the presenters of the most outstanding papers (oral or poster) presented at ICU 2017 by a student or recent graduate as determined by a panel of distinguished judges covering a broad diversity of ultrasonics topics. 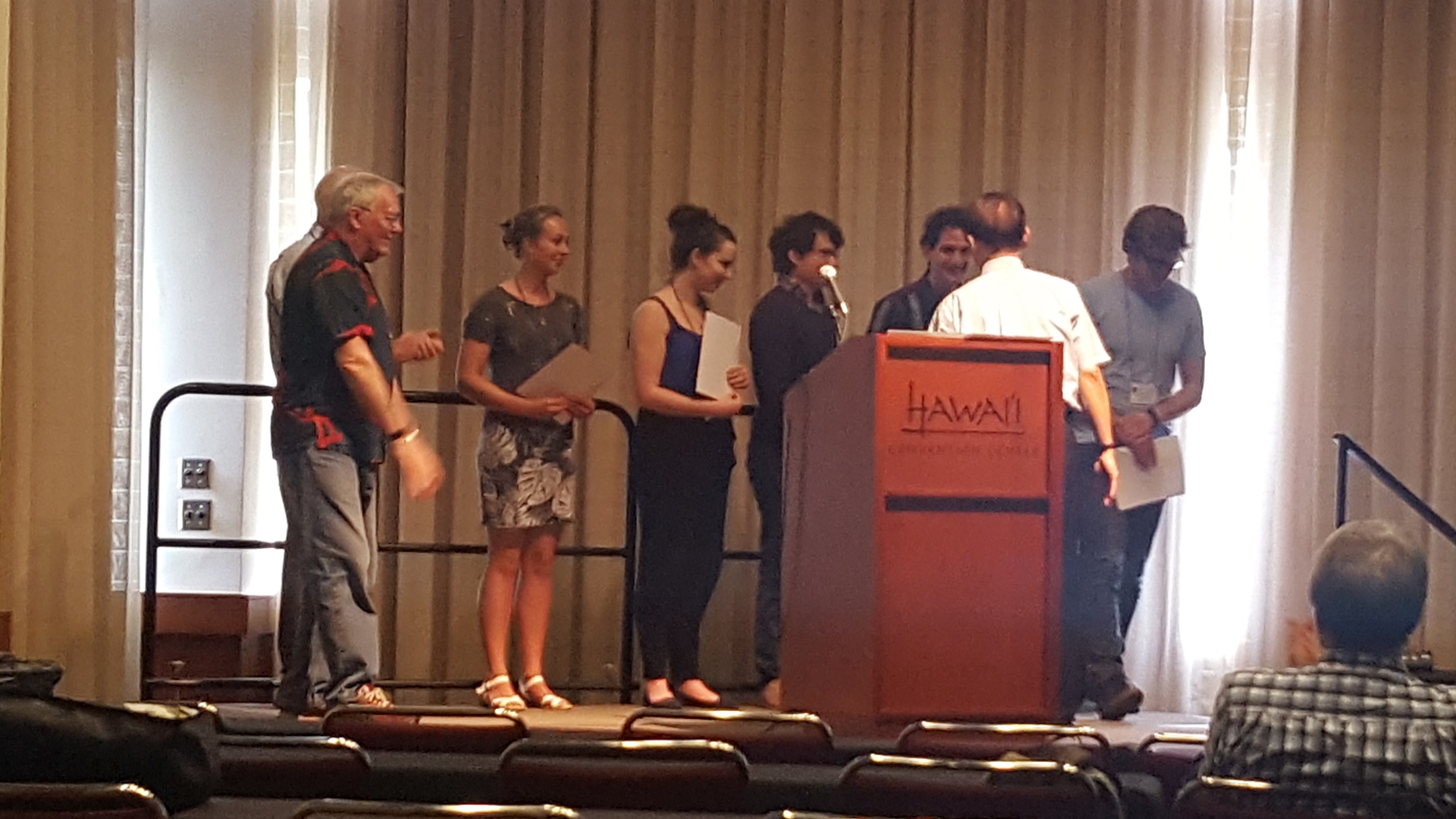 Ultrasonic surgical devices are currently used in a number of soft and hard tissue surgeries. This study focuses on investigating the driving signal conditions for an ultrasonic bone biopsy needle that will be applicable generally to high power ultrasonic bone surgery devices.  The investigation uses a LabVIEW-based driving system which has been developed to modify the excitation signal and power delivery. The goal is to identify operating signals that can allow penetration of bone with high precision, minimal heating and minimal damage to surrounding tissue. The ultrasonic bone biopsy device was designed using finite element analysis (FEA) and tuned to operate in a longitudinal mode at 25 kHz. The device was manufactured and experimental modal analysis (EMA) was used to validate the FEA model and measure the modal parameters.   A series of tests were carried out, based on the time to perform a 5mm penetration of the needle into a polyurethane foam which acts as a substitute trabecular bone material. Initially the following waveform shapes were studied; sinusoidal, square, sawtooth and triangular. During each penetration the power, temperature and time were recorded. Following this, the study focused on investigating power modulation techniques, as have been widely adopted for phacoemulsification where power modulation in cataract surgery delivers less ultrasound energy to the eye and hence improves visual rehabilitation. To replicate this technique a constant maximum input power
(MIP) was adopted, while the Duty Cycle (DC) (the percentage of time in which the signal is at the maximum) and the Low Power Percentage (LPP) (the percentage of the MIP supplied during a rest period) were both varied. Again, time, temperature and power consumption were compared. It is shown how modifications to the signal shape combined with power modulation techniques when driving the ultrasonic bone biopsy device can help to reduce the temperature while still penetrating quickly.