The Conference "Looking Beyond Industry 4.0" was the first in a series of annual conferences funded by the EPSRC Network Plus on Industrial Systems in the Digital Age under the "Manufacturing the Future" theme.  It was held as the world's first academic conference on "Industry 4.0", which is regarded as the fledging "Fourth Industrial Revolution" and the first artificially-engineered industrial revolution.

The Conference had over 80 participants, with 11 Network Plus solicited presentations (including 6 Feasibility Studies funded by this EPSRC grant), 11 other oral presentations and 30 posters.

The Conference Dinner was held at Glasgow Science Centre, preceded by a Civic Drinks Reception with Bailie Balfour on behalf of Lord Provost of Glasgow. There were three awards given at the end of the Conference: Best Methodology/Theory, Best Application, and Best Educational Value. The second conference in this series is to be held at Newcastle University on 19-20 June 2018. 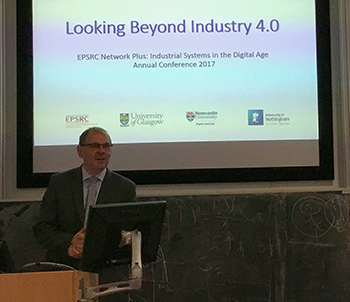