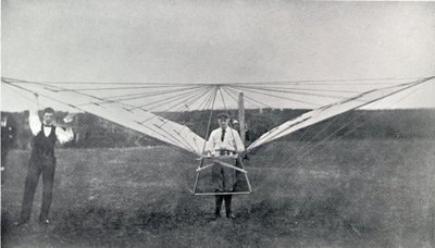 Assistant to Professor (later, Sir) John Biles, and lecturer in Naval Architecture at the University of Glasgow from 1891 to 1896, Percy Pilcher was Britain's first true fixed-wing aviator. He was also Britain's first aviation fatality. His achievement is commemorated in the name of an annual lecture given in the University of Glasgow. Engineering education in Pilcher's time, at its highest levels, embraced a blend of the theoretical and the practical for both students and staff. Percy spent his summers as a draughtsman in the shipyard of J & H Thomson, Clydebank (subsequently John Brown & Co.). Pilcher continued the work of Otto Lillienthal, successfully flying his gliders at Cardross on the banks of the Clyde. Pilcher's lecture, on 12 December 1895, was the first to be given in the UK by someone who had actually achieved repeated flights in a heavier-than-air machine.

1999 - P Jarrett: 'Percy Pilcher and the Challende of Flight'

Dugald Cameron giving the Pilcher Lecture on the 29th March 2001

More information regarding the history of Aerospace Engineering at the University of Glasgow can be found in the book: 'FROM PILCHER TO THE PLANETS' by D. Cameron, R. Galbraith, and D. Thomson.