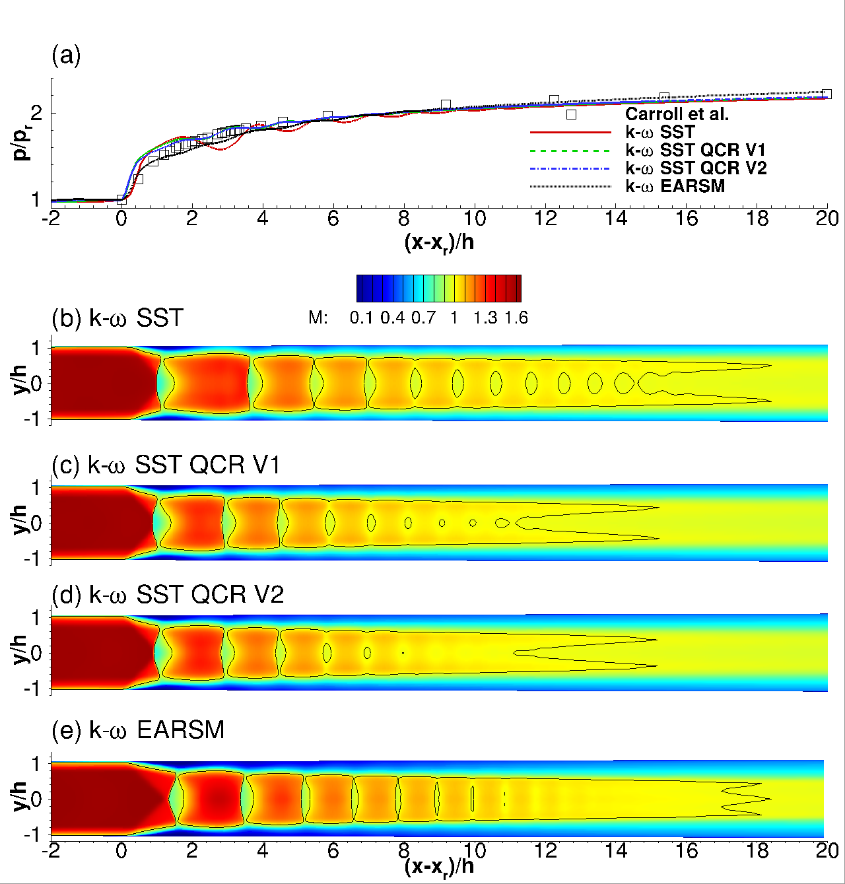 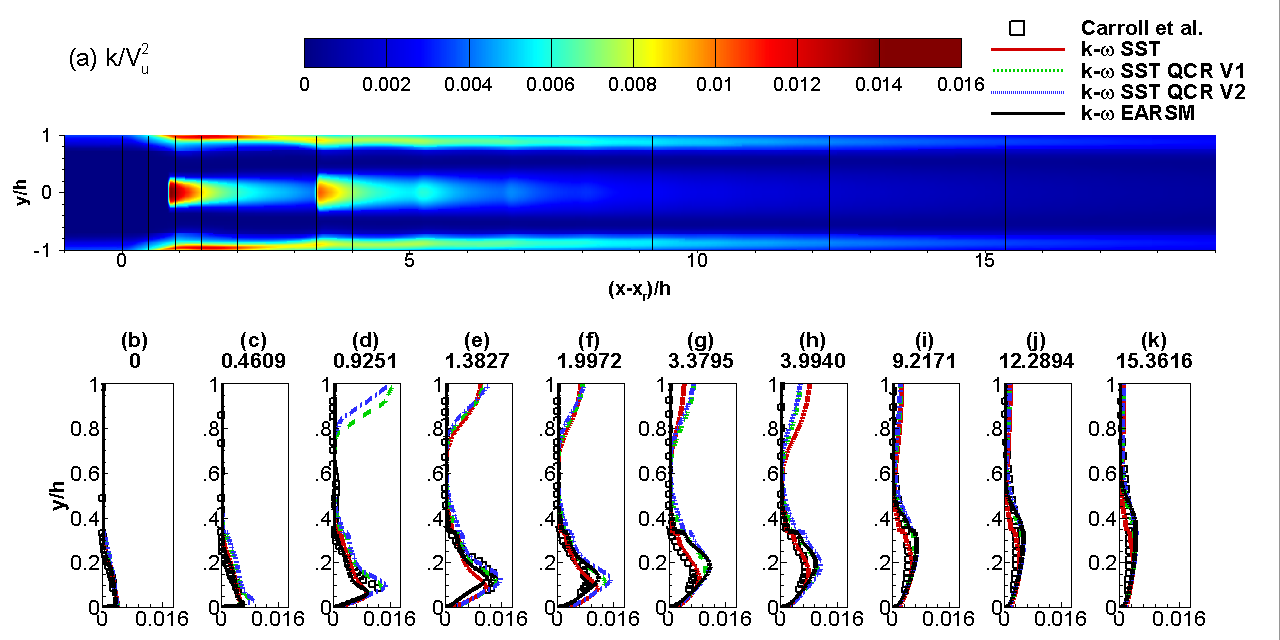 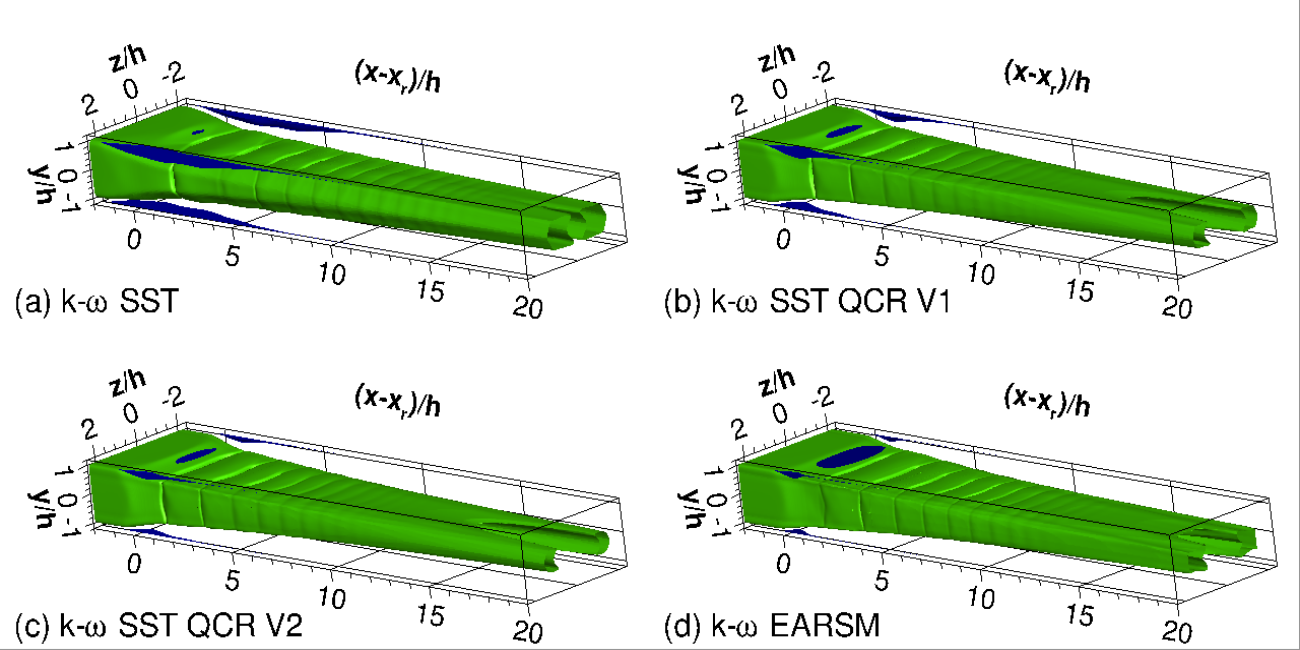 The interaction of a shock wave with a boundary layer (SWBLI) occurs in many applications such as supersonic wind tunnel diffusers and supersonic (high-speed) intakes. Under specific operating conditions multiple shock wave boundary layer interactions (MSWBLIs) can form. MSWBLIs are often referred to as shock trains or pseudo-shocks. The formation of MSWBLIs affects the performance of high-speed intakes. An example is that the pressure recovery across MSWBLIs is lower than an equivalent single SWBLI. The project investigates the accuracy of the numerical computations of MSWBLIs, the sensitivity of MSWBLIs to modelling assumptions, and possible ways of MSWBLI control. At present Reynolds Averaged Navier Stokes (RANS), detached Eddy (DES), and scale-adaptive (SAS) simulations are used with the HMB3 CFD solver of Glasgow University to investigate the flow physics and the sensitivity to modelling assumptions of MSWBLIs in rectangular ducts.  Results are compared to the MSWBLI experiments by Carroll et al. [1] which offers extensive measurements. The use of linear turbulence models resulted in strong pressure oscillations (shown in the figure on the right of the page). The oscillations were attributed to the overprediction of the corner separations. The Explicit Algebraic Reynolds Stress Model (EARSM) resulted in better agreement with the experiment by reducing the size of the corner separations.  The addition of QCR extensions to the SST model also resulted in an improved agreement with the experiment.

The linear models overpredict the corner separations and as a result the supersonic core-flow is closer to the duct wall. This causes pressure oscillations not observed in the experiment. The non-linear models reduce the pressure oscillations by reducing the corner separations and increasing the centreline separation. Once confidence was established in the simulations, simulations of shock trains in a more realistic geometry were considered. A fore-body intake geometry was created to study the effect of incidence angle, roll angle, cross-sectional area shape, and turbulence models on the shock train within the intake. The domain and boundary conditions are shown below. 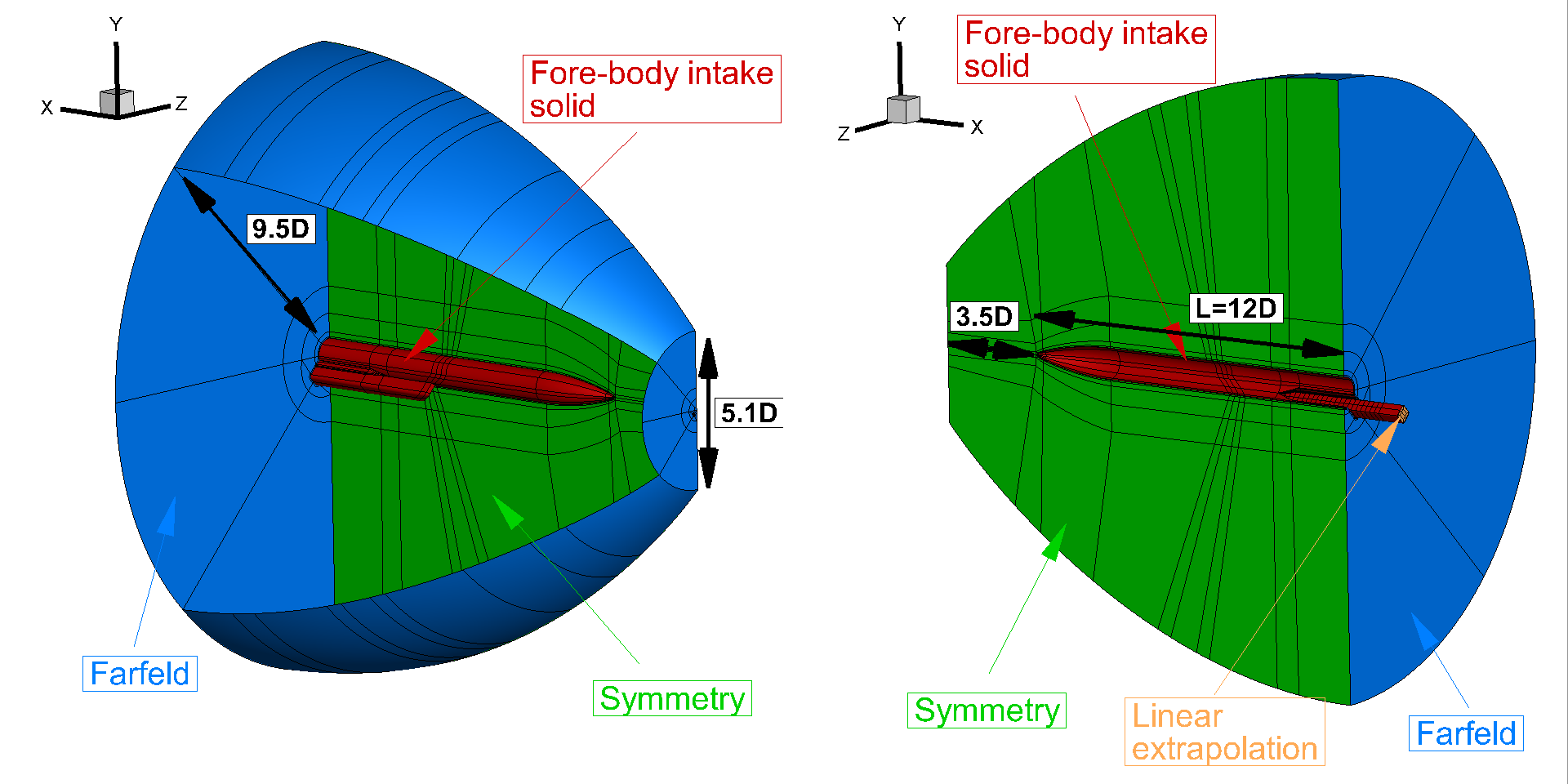 The domain was discretised using multiblock structured grids. The resulting blocking and grid are showed below.

Simulations were performed at different incidence and roll angles with the EARSM turbulence model. The SST model predicted just a single shock in some of the fore-body intake configurations which shows the importance of using non-linear models for complex shock wave boundary layer interactions like the presented one. The wall pressure and Mach number contours for one of the fore-body intake configuration are shown below.

The predicted shock train in the intake shares some similarity with the isolated shock trains in ducts. The main difference is the absence of symmetry due to the upstream interactions of the weak shocks with the boundary layer. The weak shocks are caused by the slant angle of the intake. For high total pressure recovery and low flow distortion, the shock train should be kept as far away as possible from the intake engine face. Ideally if a shock train forms in the intake it's length should be as short as possible in order to maximize the efficiency metrics. A informative presentaton on the shock train phenomenon and numerical simulations is presented below.