Our Division has a rich history and some of it can be seen through the displays and models exhibited in our building. This web page provides some basic info about what is currently in our collection and should be used as a starting point for further research in the history behind each item.

This apparatus proves that energy can be transferred from air to a lifting surface. This energy flow may lead to wing flutter that is a dangerous phenomenon for aircraft.

Placed in a wind tunnel, Duncan's Flutter Engine will transfer energy from air, via a fluttering motion of the wing, to a fly-wheel. The wheel can be connected to an alternator, and feed a small light bulb located at the control room of the wind tunnel.

Today, engineers are looking at similar concepts as harvesters of tidal and wind energy. 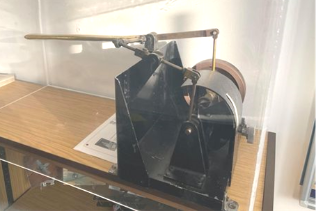 The art of propeller making  is still in demand especially for turboprops, light aircraft or replicas of historic aeroplanes.

The propeller in our lab is provided by The Airscrew Co. Ltd. of Waybridge, and was made to show different stages of blade manufacturing. The original propeller design was by Rotol.

Known as the Waybridge Blade, it equipped the Halifax aircraft of the Handley Page company, that was flown with Rolls-Royce Merlin engines.

The propeller diameter was 12’9” and was part of a 3-bladed assembly. It was mounted on a variable pitch hub that was hydraulically operated.

The lorry models on display in our collection were all tested in the wind tunnels of Glasgow with a different of more than 40 years in time.

The wooden model was tested around 1968 in our tunnels and different configurations of the aft body were considered.

The modern bus was tested around XYZ and shows great progress in efficiency and aerodynamic design.

The original report from the wind tunnel tests for the 60’s model can be found at:

Also shown here is a hand sketch of the complex flow around the vehicle showing areas of recirculation and stagnation. 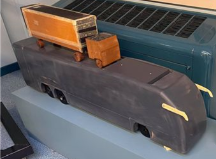 The Horn, is located in Polkemmet Country Park in West Lothian.  It is a  piece of art work resembling a gramophone that was designed to broadcast music, poetry and quotes from literature. It was testsed in the wind tunnels of Glasgow to ensure it can withstand the significant aerodynamic forces due to the frequent high winds of Scotland.

It is 79 ft height and can be seen and was commissioned by the West Lothian Council. The artists behind them were Matthew Dalziel and Louise Scullion  who needed a helping hand from aerodynamics!

The model was designed to be tested in the smoke flow visualisation wind tunnel, where flow patterns were to be observed, The model is of a hollow construction, and smoke was injected out of small holes drilled into the model surface. The picture shows the flow with the wind approaching from the left, and a powerful vortex system can be seen trailing from the swan neck. This is similar to vortex systems trailed off aircraft wings, and indicates significant force on the structure.

Scottish fact of the day: M8 motorway sculptures | The Scotsman 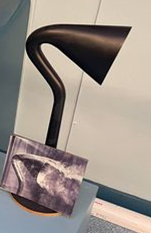 The Rolls Royce Griffon is a British 37-litre (2,240 cu in) capacity, 60-degree V-12,       liquidcooled aero engine designed and built by Rolls Royce Limited. In line with company      convention, the Griffon was named after a bird of prey, in this case the Griffon Vulture.

Design work on the Griffon started in 1938 at the request of the Fleet Air Arm, for use in new      aircraft designs such as the Fairey Firefly. In 1939 it was also decided that the engine could be adapted for use in the Spitfire. However,          development was temporarily put on hold to  concentrate efforts on the smaller Merlin and the 24 cylinder Vulture, and the engine did not go  into production until the early 1940s.

The Griffon was the last in the line of V-12 aero engines to be produced by Rolls Royce with   production ceasing in 1955. Griffon engines     remain in Royal Air Force service today with the Battle of Britain memorial flight and also power the last remaining Avro Shackleton.

Display “cutaway” engines like this would have commonly been made by apprentices in a Rolls-Royce factory.  The fact that this one is painted burgundy signifies that it came from the Hillington factory. 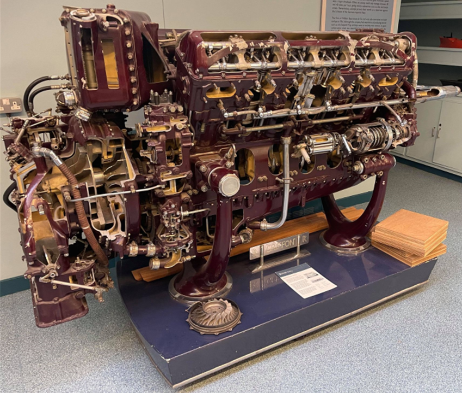 Racing cars are routinely tested in wind tunnels even at full-scale. Nevertheless, scaled  models are more common and are frequently used with wind tunnels equipped with rolling floors. The wheels of the models can also be driven by motors to accurate replicate the flow conditions. Aerodynamics of racing cars is crucial to their performance and their stability and with the advent of composite materials and additive manufacturing there is scope for detailed shape optimisation of every aspect of the vehicle.

Most likely, our model is of an Indy 500 car,  that was gifted in order to test the rolling floor facility that was installed in the  Glasgow 9’x7’  wind tunnel.

Here Are the Differences Between a NASCAR, IndyCar, and F1 Cars (motorbiscuit.com) 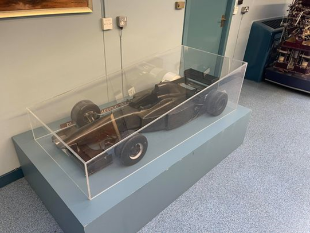 Autogyros have a long connection with Glasgow going back to the days when Weirs manufactured autogyros under license from Huan de la Cierva.

The model on display went through extensive wind tunnel testing (at the VZLU wind tunnel in the Czech Republic ) and the results supported the research at Glasgow leading to the publication of the UK CAA CAP 643 British Civil Airworthiness Requirements, Section T Light Gyroplanes.

The location of the aircraft centre of mass in relation to the thrust line was a key parameter identified as a source of instability for the vehicle, and appropriate remedies can be put in place making autogyros safer. 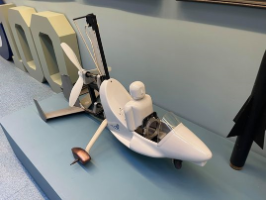 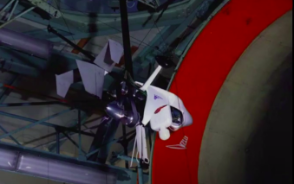 G-UNIV is the Glasgow University research autogyro. It is currently on display at the Scottish National Museum of Flight East Fortune Airfield, East Lothian.

The department of Aerospace Engineering operates the Handley Page low speed wind tunnel at its Acre Road site in Glasgow. The surviving Handley Page tunnel model is one of many famous  aircraft, such as the     Halifax, Hampden, Victor, HP115 and Jetstream, that were tested in the tunnel at Handley Page’s site at Radlett.

HP117 design studies were begun in1959 under G. H. Lee. Although a full scale HP117 was never built, the aircraft was designed to have a span of 148ft and 5000 mile range and be capable of flying 300 passengers at high Mach number. The aircraft incorporated laminar flow control to achieve low drag and high range. As such the design is very advanced for its era. 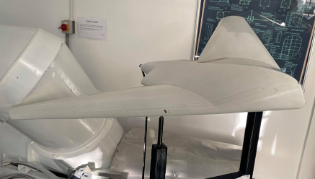 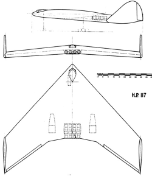 This is a wind tunnel model of the Airbus A310. It was tested in the 9’x7’ wind tunnel at the BAe site in Hatfield, England, where data for take-off and landing configurations were obtained. The Airbus A310 is a derivative of the Airbus A300, which was the first Airbus aircraft to enter service in the 1970s. A310 models were shorter with a smaller wing, and the aircraft first entered service in 1983. The wind tunnel model was equipped with engine nacelles, and the wings have high-lift devices, air brakes, ailerons and detachable undercarriage. The Hatfield wind tunnel is now sited at University of Glasgow where it forms part of the UK National Wind Tunnel Facility (NWTF). The model was gifted to Glasgow University when the wind tunnel was transferred to the University.

Take a gravity-free flight on board the Airbus A310 Zero G (airzerog.com) 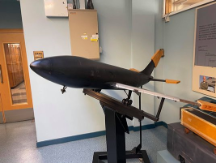 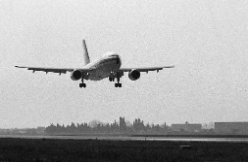 Manometers such as this were the mainstay of wind tunnel testing for decades, and were in use until reliable, electrical/ electronic       pressure transducers became available. A large wind tunnel would be equipped with scores of these devices, and they were used for wind tunnel model surface pressure   measurement, flow field pressure  measurement, wind tunnel state recording.

The inclination angle is variable to allow for change in sensitivity. The fluid level represents the pressure, the lower the level the higher the pressure, and the working fluid is stored in a reservoir to the side. Looking at the pressure levels gave an immediate impression of    pressure distribution, and accurate calculation of pressure coefficients is possible from the length of the liquid columns. 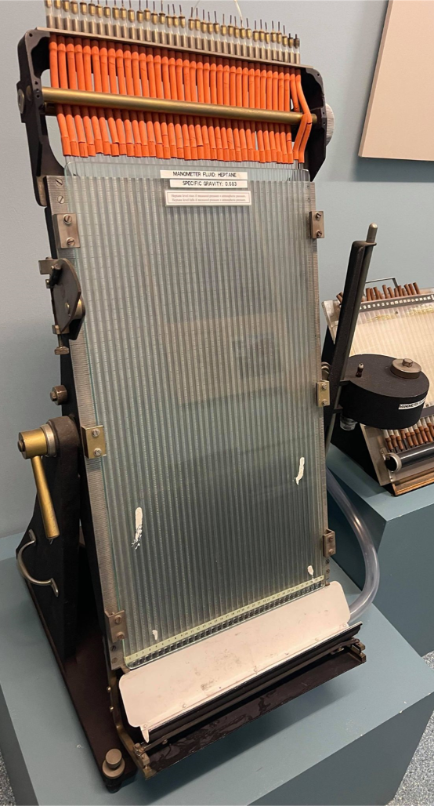 The HP115 was an experimental aircraft built by the Handley-Page company. It was a research aircraft intended to investigate low-speed handling qualities of a delta wing configuration. Data were useful for the development of the Concorde aircraft, a painting of which is in the background. The model shown is a wind tunnel test model used for the development of the test aircraft, which was tested in the Handley-Page low speed wind tunnel, now based at University of Glasgow. The HP115 model is on loan from the Handley-Page association, and an HP115 aircraft is on display at the Fleet Air Arm museum. 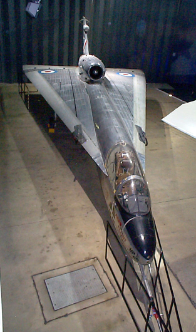 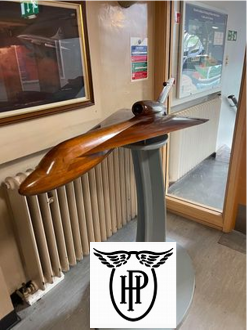 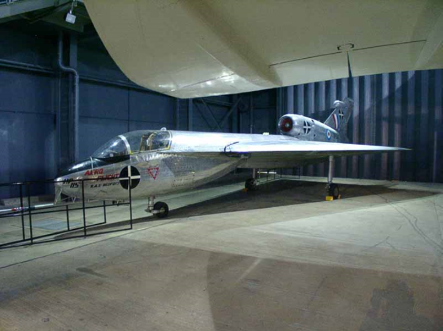 Glasgow Univeristy has a strong contribution to rotorcraft research. This display shows the different Mach-scaled helicopter blades used on the DERA “5m” rotor rig as part of the development of advanced rotor designs like the BERP. The blades were donated to our School by DSTL and Leonardo Helicopters.

On the previous photograph the followng blades are shown (from left to right):

Special thanks to John and all the team of technical staff at the School of Engineering for the time and effort put in looking after and maintaining all displayed items.