The Division of Aerospace Sciences has expertise and experience in the study of autonomous vehicles including Unmanned Aerial Vehicles (UAVs), Autonomous Underwater Vehicles (AUVs), biologically inspired vehicles and rovers. Associated research activities within the division cover everything from simulation, control and navigation system design to hardware implementation and practical vehicle trials.

In addition, there is extensive research into the coordinated guidance and control of multi-vehicle and multi-platform systems.  Autonomous micro-UAV systems have been identified worldwide by both government and industrial organisations as a critical future aerospace technology due to the vast number of potential application areas. Examples include local, squad-level tactical surveillance in the context of military or homeland security operations to locating survivors following major disasters to more common roles in surveying, power line and pipeline inspection and crop monitoring. We conduct research funded by both research councils and industry in the areas of aerospace surveillance, survivability and simulation. Ongoing research projects include nonlinear guidance and flight control, complex multi-agent multi-fidelity simulation and micro-UAV vehicle design.

Modern industries are refining their processes to improve efficiency and cost effectiveness.  In many cases there has been a move towards replacing manual processes with automation in order to achieve these improvements.  Through the addition of suitable actuation, sensors and control, the role of the human in the loop becomes one of overseeing the process rather than a working element of the system.  The introduction of automation has been shown to reduce human error and task execution time.  Therefore making the automated process efficient and increasing profitability.

However, automation comes with the additional price associated with health monitoring.  In order to make sure that the automated process operates safely the key operating elements must be monitored throughout operation.  As well as checking that the constituent parts are working properly, the health monitoring system isolates the location of detected faults and implements the best course of action to take when a particular fault occurs.

Within the Division of Aerospace Sciences the main project that looks at these aspects came from a Knowledge Transfer Partnership with Woodward Engine Systems Test.  This has expanded into research project looking at different methods for multi-variable automation and effective health monitoring.

Engineering and Science have tried to replicate the elegance and beauty of design in nature. Consequently biologically inspired systems have exhibited many benefits that come from mimicking natural processes.  This is particularly the case with autonomous vehicles where efficient and effective propulsion can be obtained by copying the mechanisms and gait found in nature.

Within the Division of Aerospace Sciences there has been extensive research into biologically inspired, or biomimetic, vehicle design.  This has been particularly focussed on Autonomous Underwater Vehicles (AUVs) and Unmanned Aerial Vehicles (UAVs).  In both areas the research has involved the simulation, design and development of prototypes to enable mathematical models to be validated using experimental data.  The particular studies that have taken place within the division are listed below:

Cognitive control is a term used by the fields of neuroscience and artificial intelligence to describe the operations involved in modelling high-level human cognitive processes such as behaviour, reasoning, memory and intuitive motor control. Operational analysis uses mathematical models of complex, interacting systems containing human operators to evaluate the outcome of applying particular strategies or tactics to achieve one or more specific goals. We are researching methods of optimising strategies by using MAVERIC simulations where each agent utilises cognitive control concepts to map perception to action. The main research project in this area is one sponsored by DSTO and is an investigation of helicopter operational analysis in littoral search and rescue/destroy missions. We hope to be able to evaluate the operational benefits of combining particular tactics with sensor suites to predict the optimal operation of the helicopter platform. 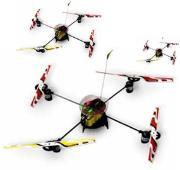 Autonomous vehicles have been used to perform duties that are too dangerous for humans to perform due to the hostile nature of the environment it is operating within.  When a single vehicle is used to perform such a task the limiting factor is its own operational range.  The range can be extended by increasing the battery capacity or designing more efficient systems for the vehicle. However, this results in a small incremental improvement in performance.

Another approach is to increase the number of vehicles used to perform the task.  This increases the range of the combined vehicle system by a factor equal to the number of vehicles.   The main research focus is the coordination of such multi-vehicle systems and ensuring that the vehicles perform the task efficiently while avoiding collisions.  Within Aerospace Sciences the following projects have investigated this subject:

Micro-Unmanned Aerial Systems (μ-UAS) are small unmanned aircraft typically with a wingspan of less than 1m. Such systems have been shown to possess significant operational potential as ‘over-the-wall’ military reconnaissance systems for geo-location of specific-points-of-interest both inside and outside buildings. There are also numerous potential civilian applications from surveying and crowd control, to cargo and individual package transportation. Our research in this area is to explore the conceptual design space of μ-UAS platforms and consequently develop new technologies to improve performance, safety, reliability and hopefully encourage public acceptance of this technology. Our μ-UAS research is supported by two main facilities: the MAVERIC simulation engine and the Micro-Airborne Systems Technology (MAST) Laboratory. The MAST lab consists of a rapid-prototyping facility for building experimental airframes and a motion-capture system for precise, low-cost, safe flight testing. Current μ-UAS projects include: 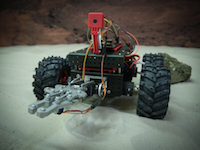 Robotic exploration is the cornerstone of expanding our knowledge of the solar system and beyond. Robotic systems including orbiters, landers, rovers and stationary probes have all contributed to our understanding of the celestial bodies in our solar system, including the Earth.

Rovers, in particular, have proven invaluable in providing a wealth of information over an extended period of time. Vehicles such as Curiosity and Opportunity continue to gather and transmit crucial data; in the latter case, well beyond the expected operational lifetime of the system. In the age of ever-increasing autonomy, robotic rovers benefit greatly from robust guidance algorithms, fault detection, isolation and recovery (FDIR) methods and fault-tolerant control.

Our research has application beyond planetary rovers, augmenting the navigation and control abilities of a wealth of robotic systems, including aircraft, submersibles and vehicles with novel locomotion systems.