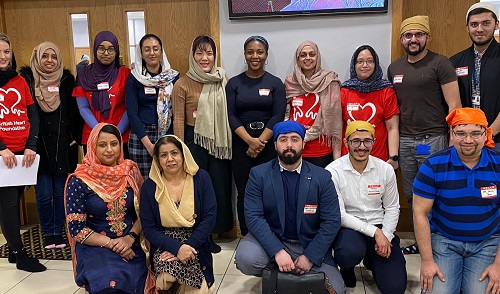 Health research requires representation from all ethnic groups. The Glasgow Blood Pressure Clinic (GBPC) Team noticed the almost no ethnic minority participation in five major hypertension trials, which suggested that the group’s annual public engagement events held since 2012 were not fully inclusive.  The team consulted different ethnic groups and co-developed a new bespoke public engagement model. The impact was immediate and measurable with increased patient recruitment into trials and interest from the Scottish Government and Glasgow City Council to adopt this engagement model for wider implementation. There was a total of 11 events organised where BP measurement, diabetes screening, health education and clinical research advocacy in mosques, temples, gurdwaras and an African community centre in Glasgow were conducted, led by Dr Stefanie Lip and the GBPC team. A total of 800 blood pressure measurements were checked.

The GBPC team has been announced the award winners for the MVLS Engagement with Research Awards 2021. (https://www.gla.ac.uk/colleges/mvls/researchinnovationengagementsupport/publicengagement/rewardandrecognition/mvlsengagementawards/)

The team is delighted by the assessors’ comments on their winning submission – “Assessors were unanimous in their praise for this well designed, high impact project. By extracting learning from previous public engagement activity, and finding appropriate new partners, the team were able to extend the reach and inclusivity of their engagements. The impact of this engagement is very impressive.” 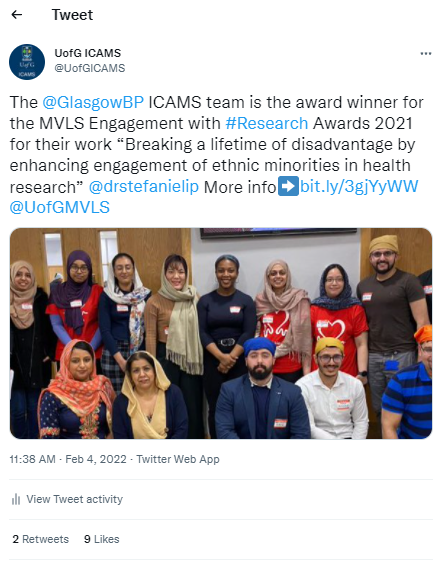