Adam Smith 300 launches in January 2023 with events showcasing exciting plans for the Tercentenary and providing a taster of what is to come in 2023.

Born in Kirkcaldy, Fife, in June 1723. Adam Smith started his studies at the University of Glasgow aged 14. In 1740, he was awarded the Snell Scholarship, and left to study at Oxford. In 1751, Smith returned to Glasgow as a Professor of Logic, later becoming Professor of Moral Philosophy.

While at Glasgow, Smith published the first edition of The Theory of Moral Sentiments in 1759, developing upon the principles and concepts explored in his lectures.

Smith’s final connection with the University came in 1787 when he assumed the prominent position of Rector. Adam Smith remembered his time at the University of Glasgow as: 'By far the most useful and therefore as by far the happiest and most honourable period of my life.’

He published arguably his most famous work The Wealth of Nations in 1776 and died in 1790.

If you are interested in Adam Smith and would like to find out more about his legacy and how you can get involved, visit the University’s Adam Smith 300 year anniversary website. 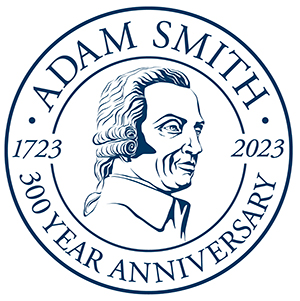