You will develop an understanding of Bayesian methods relevant for the analysis of financial and macroeconomic time series. The emphasis throughout this course is on Bayesian estimation and computation, and specification of flexible models. You will cover several topics and examples from macroeconomics and finance.

This short course will introduce a very large spectrum of time series models used in macroeconomics and finance. Instead of focusing on the theoretical time-series properties of these popular models, you will delve deeply into estimation issues which are of practical importance for applied researchers and PhDs/interns. You will focus on the use of Bayesian methods to jointly model many time series with short numbers of observations (as is the case with quarterly macro data for most countries). At the same time, you will also focus on flexible econometric modelling of the Great Recession, the current pandemic, and beyond.

This programme is designed for those with a basic knowledge of regression and time series models. In particular, you should be familiar with time series concepts at the level of: Brooks, C. (2019) Introductory Econometrics for Finance, 4th Edition, Cambridge University Press, or: Tsay, R. (2010) Analysis of Financial Time Series, Wiley Series in Probability and Statistics.

The course will focus on the Bayesian inference aspect of time-series models. As it won’t review basic time series concepts such as autocorrelation, or how to convert an AR into an MA and vice-versa, it will rely heavily on distributions such as the Normal, Bernoulli, Gamma, and Wishart, so students should be familiar with the concept of a p.d.f., a c.d.f, and their basic functional forms.

Computations are in MATLAB. You will be provided with all the code in a very accessible form, so that even those with no knowledge of programming can attend this class. There is an expectation you will have at least some basic MATLAB skills (for example, know how to estimate a regression with OLS using basic commands, such as " >> beta_OLS = X/Y ").

By the end of this course participants will be able to:

Further references will be provided during the course.

What you will learn

Lecture 1a: An overview of Bayesian Inference; basics of Bayesian computation; Inference in the Normal linear regression model

Lab 5: TVP-VAR for measuring the transmission of monetary policy (Primiceri, 2005); a large TVP-FAVAR for extracting a Financial Conditions Index (Koop and Korobilis, 2014) 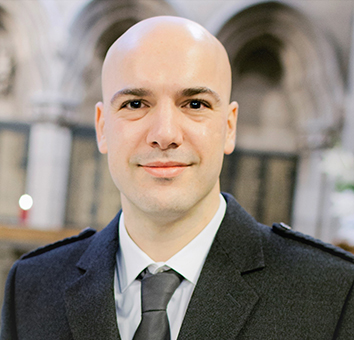 Dimitris Korobilis  is Professor of Econometrics at the Adam Smith Business School. Before joining Glasgow he was Professor of Finance at Essex Business School, University of Essex. He works in advanced statistical inference using economic and financial data. Recent research involves the development of machine learning algorithms for high-dimensional inference in macroeconomic models with large datasets; research that has been published in Journal of Econometrics and Journal of Business & Economic Statistics, among other journals. His models have been used extensively by policy-making institutions to monitor financial conditions (International Monetary Fund) and to forecast inflation (European Central Bank). He has been a consultant for major international institutions (e.g. US Department of Energy) and government (e.g. Scottish Government), and he delivers regularly specialised training in central banks on topics related to statistical inference that supports policy decision-making.

To apply, please email your CV confirming you wish to attend the course to: