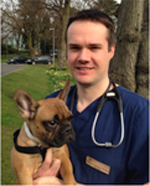 Rodrigo graduated from the National Autonomous University of Mexico in 2005. He spent one year in practice in Mexico before beginning an internship in 2006 at the National Veterinary School of Nantes, France. In January 2009 he began a three year residency in Neurology at University of Glasgow and in 2012 he was awarded his European Diploma in Veterinary Neurology. He also completed a Master in prognostic factors in spinal cord injury in dogs. In 2013 Rodrigo Became a University Clinician. Rodrigo’s clinical interests include neurosurgery, spinal cord injury and Vertebral column deformities.