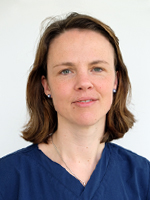 Kate Stalin graduated from the University of Cambridge in 2003 before working in general practice in Aberdeen. In 2005 she returned to Cambridge as a resident in neurology. After completing her initial training at the University she then completed her residency running a neurology service in a private referral practice in the north of England. In 2008 Kate was awarded her European Diploma in Veterinary Neurology and subsequently worked as a clinical neurologist at Stone Lion Veterinary Hospital. In 2012 Kate joined the neurology team at University of Glasgow. Kate’s clinical interests include neurosurgery, inflammatory brain disease and CNS neoplasia.