Roughly half the human population is infected with human cytomegalovirus (HCMV). In general, HCMV is kept in check by healthy immune systems, but is the major viral cause of birth defects and developmental disabilities such as hearing loss, visual problems and other neural impairments.

HCMV is also the most significant complication in solid organ transplantation (affecting 15–60% of patients) and a major complication of bone marrow transplantation (20–35% of patients), leading to life-threatening disease due to immune system impairment. HCMV also presents a significant risk to patients with HIV/AIDS. The care costs associated with these high-risk groups in the USA alone have been estimated at over $4 billion per year.

Researchers led by Andrew Davison, Programme Leader in the MRC-University of Glasgow Centre for Virus Research genetically characterised a strain of HCMV known as ‘Merlin’, and as a result of this the World Health Organisation (WHO) adopted the strain the strain as the first diagnostic standard.

The standard has been distributed to over 43 countries and is used to calibrate major commercial diagnostic test kits, including the first standardised test approved by the United States Food & Drug Administration. The standard provides consistency across healthcare centres in relation to the diagnosis of HCMV-associated disease, and the clinical management of patients treated with HCMV antiviral drugs. 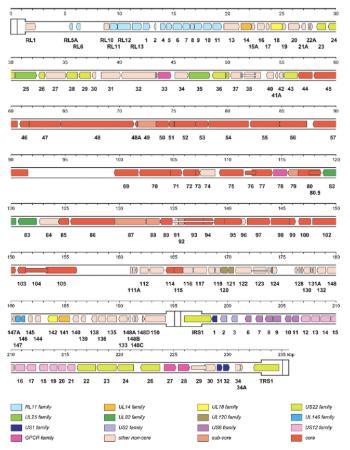 Human cytomegalovirus (HCMV) has the largest genome of the known human viruses, and is one of nine herpes viruses known to infect humans. For decades, researchers have grown (‘passaged’) laboratory strains of HCMV in human tissue culture cells. However, such high-passage strains have mutated, and are now unrepresentative of original wild-type viruses.

Working together with a Cardiff University team (Prof Gavin Wilkinson and Dr Richard Stanton), the CVR team sequenced the genome of a 'low-passage' strain (Merlin), providing the first description of a clinically relevant HCMV genome.

This, and subsequent characterisation of the clinical HCMV genes and creation of new tools to conduct functional studies on the virus, has provided a singular and clinically relevant study system.

Improved screening and management of HCMV

HCMV has poorly defined clinical symptoms, so diagnosis of congenital HCMV or HCMV-related neurological, eye or respiratory illness (and monitoring of immunosuppressed patients) is accomplished by laboratory testing. Antibody-based qualitative tests struggle to distinguish between active disease and latent infection. However, quantitative techniques, based on polymerase chain reaction (PCR), have now become a standard.

Recognising infection depends upon quantifying the amount of virus in blood or urine (the 'viral load'). However, prior to the work on 'Merlin', quantitative-PCR assays in individual laboratories used different reference standards, which were often incomplete (or clinically irrelevant) strains. This introduced a lack of consistency, which also means there was no consensus on how to relate the viral load in the blood to disease prognosis, or when to start, stop or modify treatment.

Merlin as a reference standard

WHO International Standards are the highest order of reference for biological substances. They enable the calibration of secondary references used in routine laboratory assays, and provide a uniform measure for comparison between laboratories, regardless of instrumentation or reaction conditions.

The adoption of Merlin as the 1st WHO International Standard was only possible due to the thorough characterisation of the strain, and its wide availability to study — with both its genome sequence being the official NCBI reference, and the strain itself deposited with the ATTC.

Major commercial diagnostic test kits for HCMV infection use the WHO standard, and this — together with the validation of these diagnostic tests in clinical trials — is improving the reporting of meaningful clinical data on HCMV. This includes monitoring of viral load, and establishing the cut-off values that represent different disease stages in different patient groups, and so informing future guidelines that clarify decision making for clinicans treating HCMV infection and disease.