ASSIST Global: Can we implement and research a schools-based smoking prevention intervention, developed in the UK, in a range of low- and middle-income countries?

By the ASSIST Global team.

Between 20th and 24th May 2019, an international group including representatives from East Asia (China), South-east Asia (Indonesia and the Philippines), Eastern Europe (Moldova) and the UK (England and Scotland), met at the University of Glasgow. The focus of the meeting was on ASSIST, a schools-based smoking prevention intervention for teenagers which research has shown to be effective in the UK. The meeting was part of a small Global Challenges Research Fund (GCRF) project called ‘ASSIST Global’ which aimed to undertake preparatory research and build international research partnerships to assess whether it would be feasible to implement and evaluate such an intervention in a range of low- and middle-income countries.

Twenty-one years ago, in 1998, UK adult smoking rates were 27%, and 24% of 15 year olds were ‘regular’ smokers. Concerns about these rates and evidence that existing schools-based anti-smoking programmes had little impact on behaviour, coincided with promising results from a small-scale evaluation of an informal, peer-led intervention that aimed to prevent smoking uptake in secondary schools. That intervention was subsequently scaled up to become A Stop Smoking In Schools Trial (ASSIST). ASSIST is ‘peer-led’. We know there are strong associations between a teenager’s own smoking and that of their friends: those who smoke tend to have friends who smoke. But research evidence has also shown that influences from friends and peers can be protective, and this has led to attempts to use peer influence for positive outcomes. The central idea of ASSIST is that teenagers, called ‘peer supporters’ spread the word among others in their school year group about the risks of smoking and the benefits of not smoking – and they do this in an informal way, just via conversations.

Between 2001 and 2004, a large randomised controlled trial was conducted to evaluate ASSIST. It included around 11,000 12-13 year old students in 59 schools in Wales and south-west England (29 ‘control’ schools, continuing their usual smoking education; 30 ‘intervention’ schools, receiving ASSIST). The trial suggested the ASSIST intervention resulted in lower levels of regular smoking uptake that were still evident when researchers surveyed the students two years later. In 2010 ASSIST became a licensed programme and has been made widely available via a not-for-profit company, ‘Evidence To Impact’. Over 131,000 school students have now taken part in ASSIST in the UK, via more than 21,000 peer supporters. The ASSIST outcome results suggest about 2,600 teenagers who would have gone on to take up smoking have not done so. However, a 2015 Scottish feasibility trial suggested opportunities to have informal conversations about smoking with peers may now be limited because UK smoking rates have dropped markedly over the past few decades and rates among teenagers are now very low. Evidence to Impact now works with English and Welsh Local Authorities to target the intervention to areas where smoking rates are highest.

Nevertheless, the intervention clearly has potential for adaptation to wider populations including cross-cultural applications. Indeed, it is currently being rolled out in France and trialed in Colombia, an ‘upper middle-income’ country. In 2018, a team from the University of Glasgow MRC/Social and Public Health Sciences Unitand School of Education received funding for a Global Challenges Research Fund (GCRF) to undertake preparatory research and build international research partnerships ahead of a proposal to a larger GCRF call to undertake implementation trials of ASSIST in two or more settings. The project’s first task was to identify potential international colleagues with relevant research interests, in countries with high (and, preferably rising) smoking rates and, if possible, varying social, political and school contexts in order to learn about the potential feasibility of ASSIST in different cultural settings. After a period of desk-work, e-mails and video meetings, research partners were identified in four countries: China (Institute of Child and Adolescent Health, Peking University, Beijing); Indonesia (Faculty of Medicine, Public Health and Nursing, Universitas Gadjah Mada, Jogjakarta); Moldova (State University of Medicine and Pharmacy "Nicolae Testemitanu", Chisinau); and the Philippines (De La Salle University, Manilla). The OECD currently classifies China as ‘upper-middle’, and Moldova, Indonesia and the Philippines as ‘lower-middle’ income countries.

Each country partner undertook scoping work to explore the feasibility of implementing ASSIST.  This revealed fascinating cultural, social and political diversity across the four LMIC partner countries - and some key shared issues: 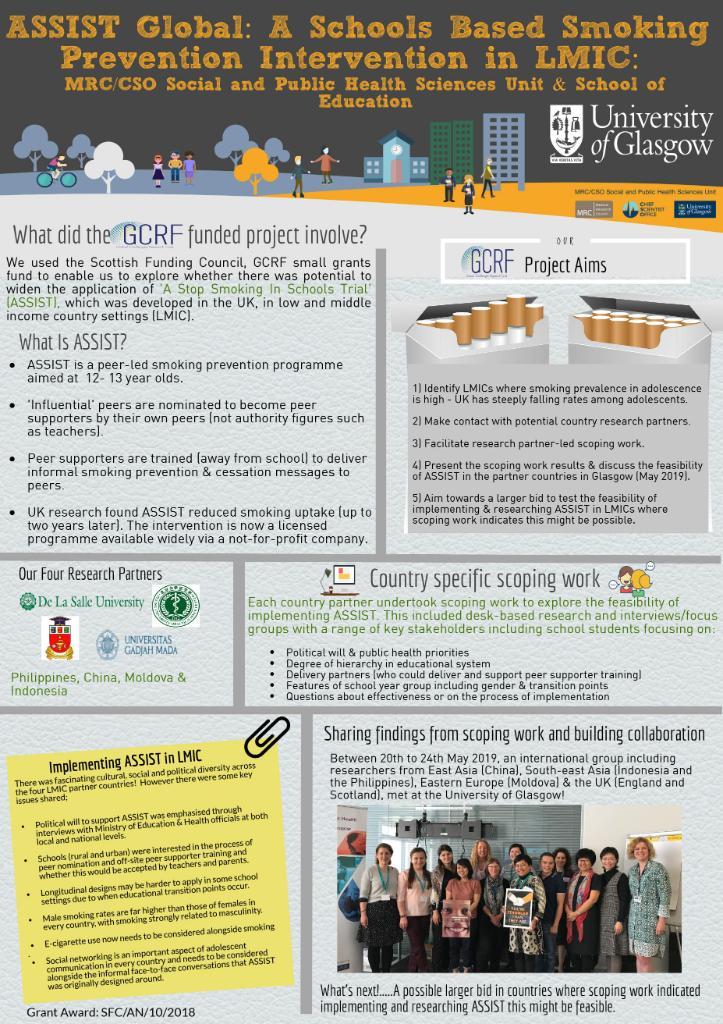 One of the aims of the Glasgow meeting was to build strong foundations for collaboration.  We did this not only through meeting sessions, but also during social events: meals, a boat trip on Loch Lomond and a visit to a ceilidh (Scottish traditional dancing).  The week-long meeting cemented relationships already begun when one or other of the Glasgow team visited each of the country partners early in their scoping work.  The discussions were enriched by the inclusion of individuals with hands-on experience of the ASSIST intervention, the related randomised controlled trial, and running trials and process evaluations more generally. We are already thinking and talking about the next stage, which is likely to be an exploratory trial to assess the feasibility of implementing and researching ASSIST in one or more partner countries. 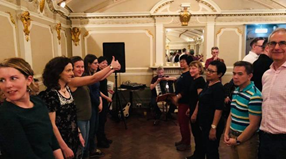 We have produced a report that draws on scoping work reported on and discussed at the meeting. It describes ASSIST and issues related to whether it might be feasible in any of these countries, given their cultural, social and political diversity, and ends by asking ‘What next’?