Dr Linsay Gray is a Senior Investigator Scientist and workstream lead in the Measurement and Analysis of Socioeconomic Inequalities in Health Programme at the MRC/CSO Social and Public Health Sciences Unit. In this blog, she shares her experiences participating in the inception meeting and launch event of the Global Challenges Research Fund ARISE Hub on Accountability in Urban Health which took place in Nairobi, Kenya 12–15 February 2019.

It’s not every week in life that a UK-based researcher gets to meet empowered Nairobi slum-dwelling female and male sex workers, the Chief Financial Officer of a youth organisation working in those informal settlements, a skilled young tailor, and an aspirational film-maker proud to be geographically linked with a former US President…

…but that’s what happened during my first ever trip to Africa.

Along with fellow ARISE consortium members from Sierra Leone, Bangladesh and India as well as the UK, we were given a warm and sincere karibu (welcome) to the ARISE inception meeting in Nairobi by our inspiring hosts and colleagues at the African Population and Health Research Centre and LVCT Health.

Led by Liverpool School of Tropical Medicine (Prof Sally Theobald is Principal Investigator and Dr Rachel Tolhurst is Research Director supported by equally committed Liverpool colleagues), the ARISE (Accountability and Responsiveness in Informal Urban Settlements for Equity in Health and Well-being) Hub has the vision to “catalyse a step-change globally, nationally and locally in approaches to improving state-citizen accountability and promoting equity in the well-being and health of marginalised people living in poverty in informal urban settlements.” The programme involves qualitative and quantitative studies across 20 informal settlements in 10 cities across India, Bangladesh, Sierra Leone and Kenya.

SDI’s oft-chanted slogan, “information is power” is music to my ears! As a statistician, I am all about information, of the numerical kind. New to consortium, myself and colleagues from Institute of Health and Wellbeing at the University of Glasgow are taking on the component of the programme which seeks to use the metrics of importance identified in partnership with the slum dwellers themselves to empower them to lobby for change in terms of aspects such as housing and sanitation to ”claim their right to health”.

There was no shortage of work to be done during these first steps to securing the power-inducing information. As well as group activity sessions on items such as stakeholder mapping, safeguarding, logframe and theory of change refinement, the programme for the week also included community site visits. 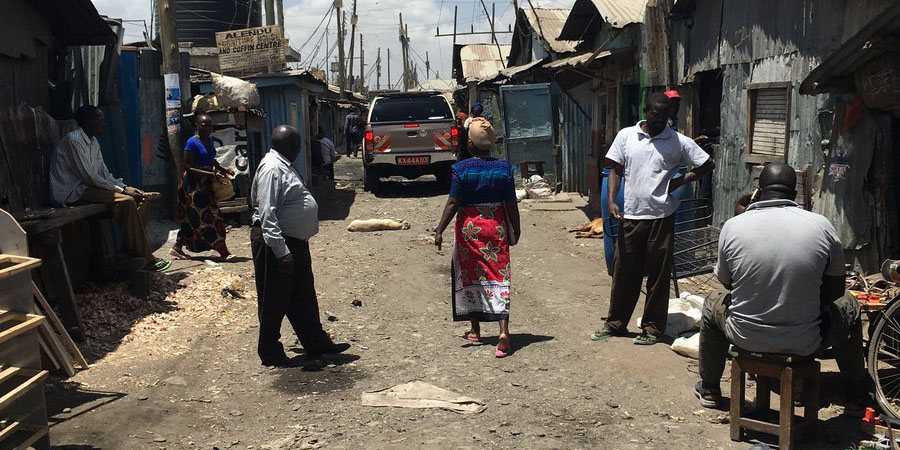 During our site visit to the Kawangware informal settlement we were welcomed to LVCT Health’s drop-in centre. The centre offers HIV prevention, care and treatment services to key and general populations (“key populations” are people who inject drugs, men who have sex with men (MSM), transgender persons, sex workers and prisoners). The organisation functions impressively, delivering a structured and effective approach to harm reduction. Staff talked to us about their diverse roles necessary for the running of the centre and, of particular interest to me, its database systems. We heard from candid sex workers on their peer educator and MSM peer co-ordinator roles. Supported by the centre, they leverage and cascade their personal development, learning, empowerment and networks to influence fellow sex workers to negotiate transactions with self-worth and confidence to practice safely.

Empowerment was another theme of our visit to a neighbouring DREAMS project office. DREAMS intervenes to reduce HIV infections among adolescent girls and young women in sub-Saharan Africa with the goal of helping girls develop into Determined, Resilient, Empowered, AIDS-free, Mentored, and Safe women. We heard from DREAMS girl Rebecca, a young mother who has been supported to establish her own tailoring business with plans to expand and employ a workforce. We were able to admire her handiwork while she spoke, as she was proudly donning one of her own ensembles of beautifully printed fabric. All the while, as the wind blew and rattled the precarious corrugated iron roofs around us, it was brought home to me the multitude of ways in which the health and wellbeing of the dwellers of these communities are so vulnerable.

Friday was the final and biggest day of the week. The ARISE Hub was launched officially with the unveiling of our website to an audience of stakeholders ranging from residents of informal settlements to government officials. The residents included representatives from community groups, Community Health Volunteers and religious leaders. The event provided the opportunity for the ARISE consortium members and Kenyan stakeholders to come together and discuss the concerns that matter most to the residents to help point the way forward. The issues raised covered documentation, infrastructure, government inaction and inclusion of community in development initiatives. I had the opportunity to have an insightful discussion about the limitations of census conduct in informal settlements with Albert, the CFO of Nairobi’s U-Tena Youth Organization branch. Throughout the week we were accompanied by a team of film makers. In an exchange with the assistant film maker, he proudly portrayed the Kenyan homeland he has in common with Barack Obama Sr., father of the 44th President of the United States.

In a demonstration of the commitment of the University of Glasgow to the ARISE project, we were joined for the last two days by my colleague, Prof Alastair Leyland. Not many Europeans can say they have travelled for a single overnight stay in Kenya, but Alastair did just that.

So, with thoughts of the memorable sites/sights, sounds and individuals encountered during that eventful inception week, we endeavour to ARISE to the challenge! Asante (thank you) to our hosts!