When you hear statements like “one in five people smoke”, or “one in six people are teetotal” you may be tempted to ask – “yes, but how do they know?” Common sense tells us that not every person in the country has been asked! To do so would be an inefficient use of time and money, and besides, there’s a far better way. You can take a sample of people – say, 5000 – that are representative of the population of Scotland, and you can see how many out of the 5000 are teetotal. If, say, 800 out of the 5000 are, 16 percent, you’ve made an estimate based on a sample without having to ask every person. This is exactly what the Scottish Health Survey does and why it is such a valuable tool.

The Scottish Health Surveys are a series of surveys commissioned by the Scottish Government which have been run since 1995, and have been conducted annually since 2008. Selected adults – and, since 1998, children – living in private households are interviewed and this method of population-sampling and first-hand collection of information give us a rich source of data, highly relevant for policymaking and understanding the health of the nation. Detailed information such as this cannot be obtained from other sources such as clinical data.

The latest survey findings, on data collected in 2015, have just been published and these provide us with a changing picture of the health of the nation. Working together, the MRC/CSO Social and Public Health Sciences Unit and ScotCen analysed the data on alcohol, smoking and general health and the results make for some interesting reading:

The average amount drunk by the Scottish population had declined over the decade to 2013 and has since steadied (see Figure 1). Meanwhile, although hazardous or harmful alcohol consumption on a weekly basis fell from 2003 until 2013, this has now levelled out and the picture is of one in four adults still consuming hazardous or harmful levels of alcohol every week.

Similar patterns can be seen for those adults who consume above three units (women) or four units (men) on the drinkers’ heaviest drinking day.

At the same time, non-drinking among adults has increased significantly from 11% in 2003 to 16% in 2013 and has remained at that level since. Patterns differed by gender with both the amount drunk and the levels of hazardous or harmful levels of drinking in men seen to be twice as high as in women. 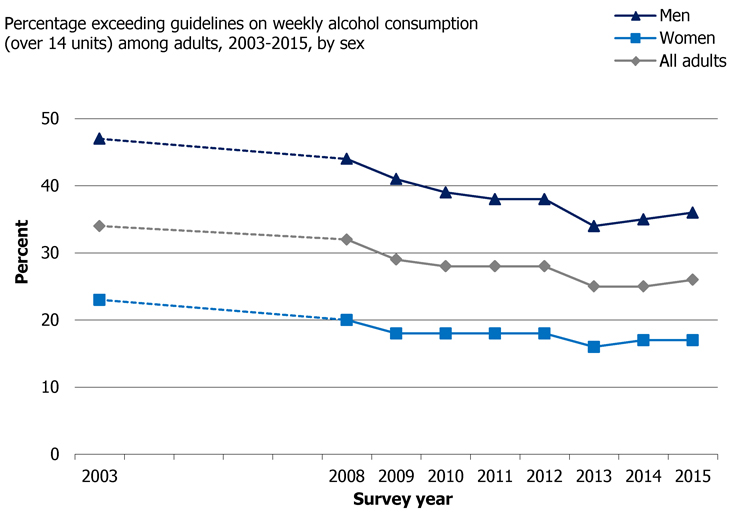 The percentage of adults smoking (see Figure 2) and the number of cigarettes smoked also has decreased over time. 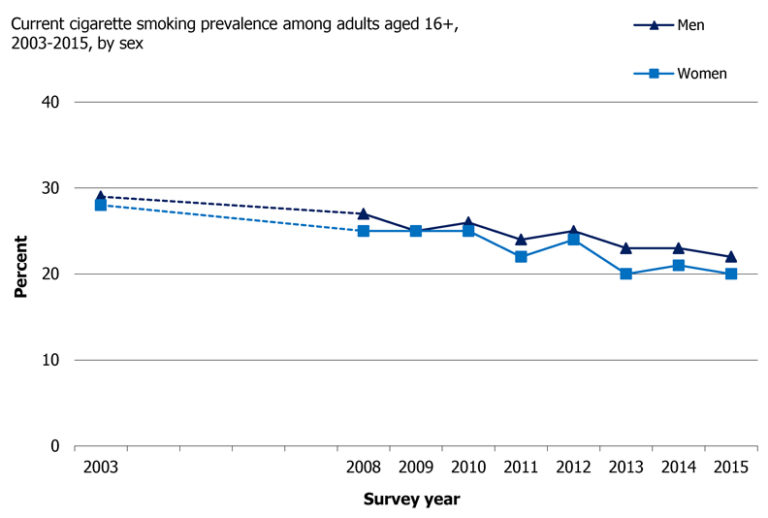 More recently, the findings also reflect an increase in the use of e-cigarettes by adults, up to 7% in 2015 from 5% in 2014. Young adults were found to be the most likely to have ever tried an e-cigarette.

A new pattern has emerged in relation to smoke exposure in domestic settings.  There were decreases between 2014 and 2015 in the proportion of children who were exposed to second-hand smoke in the home, dropping from 11% to 6%. The proportion of adult non-smokers who said they’d been exposed to second-hand smoke in their own or other people’s homes declined from 25% in 2003 to 12% in 2015.

And what of general health and wellbeing? Around three-quarters of men and women described their health as ‘very good’ or ‘good’ in 2015, a figure which has changed little since 2008. Nearly all (95%) of the children surveyed were reported to be in ‘very good’ or ‘good’ health. However, digging deeper, adults in the most deprived areas were more likely to live with a combination of health conditions, as were six in ten of those aged 75 and over (see Figure 3). 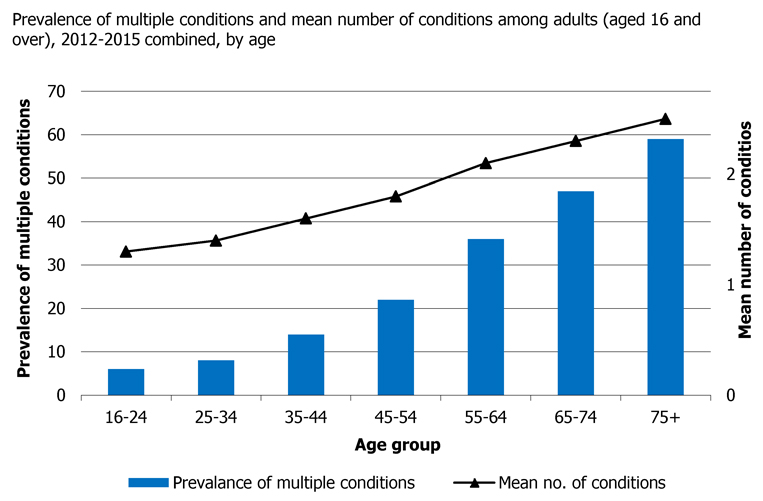 So what does this all mean?

The findings from latest Scottish Health Survey can help all those working to take action to improve the nation’s health. We can see evidence of the effect of public health interventions, services, and messages, and this could support further action. For example, the Scottish Government has a dedicated strategy to tackle alcohol-related harms and, by looking at existing and future results, we’ll continue to be able to assess changes in alcohol consumption over time. Also, the more common use of e-cigarettes is a recent activity and it will be interesting to monitor take up and see whether there is a long-term correlation between this and the reduction in smoking. With the population of Scotland ageing, there are likely to be increasing demands on services to support people living with multiple conditions, especially in the poorest neighbourhoods.

Scotland’s picture of health may not always be a ‘picture of health’ but it is thanks to the Survey, and those who take part and share their information, that we know what shape the population is in.