Robert Burns "may have had bipolar disorder" 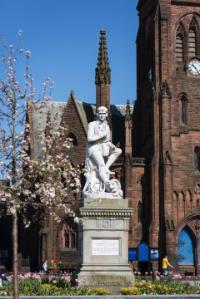 IHW's Professor Daniel Smith and colleagues from University of Glasgow's Department of Scottish Literature examined more than 800 of Robert Burns' letters and journals in a bid to establish if Scotland's national bard had a mental health condition. They now have evidence to suggest that he may have suffered from bipolar disorder, his mood often cycling between depression and hypomania. This in turn may account for his periods of intense creativity, temperamental personality, and unstable relationships.

During his lifetime and since his death, Burns has often been viewed as a tortured poetic genius, which helped to explain his reputation as a lover of life, women and drink. It's only in the last two decades that it has been mooted he may have suffered from a mood disorder. This project is using modern day methods to track and categorise the the bard's moods and work patterns, in place of face-to-face interviews with a psychiatrist.

On the potential of this work to help destigmatise psychiatric disorders in the present day, Professor Smith commented:

Today there is greater awareness of the importance of mental health issues and we hope our project can be part of this debate. Carefully assessing the mood and behaviour of one of Scotland’s iconic figures, using both medical and literary expertise, is a new approach that helps to paint a picture of his mental health and how it affected both his life and writing. Obviously it hasn’t been an easy task given our subject has been dead for more than 200 years. We hope that the possibility that Scotland’s national bard, a global icon, may have had bipolar disorder will contribute to discussions on the links between mental illness and creativity. This work might also help to destigmatise psychiatric disorders such as bipolar disorder and depression.

I am delighted to be involved in such important cross-disciplinary research which I hope will help to inform today’s debate on mental health.