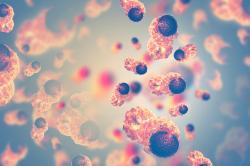 Research published in BMC Public Health has found that media articles featuring personal cancer stories more frequently focus on younger people, with only 15% of non-celebrity cancer stories, and 36% of "celebrity" cancer stories, relating to people over 60.

The study examined and analysed 800 newspaper articles about the four most common cancers – breast, prostate, lung and colorectal – published within eight UK national newspapers from 2003-2004 and 2013-2014.

Age is a risk factor for cancer, yet we know older people commonly underestimate this risk, are less likely to be aware of the early symptoms and are more likely to be diagnosed with cancer at a late stage.

Our findings are concerning because we know the media are a key influence on the public’s understanding and awareness of health issues, including cancer risk, such as in the cases of Jade Goody and Kylie Minogue, both of which resulted in increased screening uptake. As older adults are underrepresented in cancer stories, they may miss out on information which could mobilise them to take up screening or seek help.

The study also found the proportion of articles that mentioned age as a risk factor decreased significantly in articles about breast cancer, which was the most common focus of articles overall (64.3%), despite lung cancer being responsible for the largest proportion of deaths.