Title: The epidemiology and impact of inter-epidemic Rift Valley Fever in Tanzania 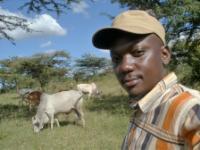 About James: Makuru James Nyarobi holds a MSc. Life Sciences of the Nelson Mandela African Institution of Science and Technology (NM-AIST), and BSc. Animal Science of Sokoine University of Agriculture (SUA). James has five years experience working for the livestock and environment sectors in Tanzania, dealing with issues related to livestock development. He has keen interest in understanding zoonoses and emerging infectious diseases. He identifies that animal diseases such as Rift Valley Fever, is one of the factors that affect development of the livestock industry and is of public health significance. James is now a PhD candidate at the University of Glasgow, Institute of Biodiversity, Animal Health and Comparative Medicine. His PhD project focuses on Epidemiology of Rift Valley Fever in northern Tanzania

Project Outline: Rift Valley fever (RVF) is an arthropod-borne viral disease of ruminants, camels and humans. It is also a significant zoonotic disease which may be encountered as an uncomplicated influenza-like illness, but may also present as a haemorrhagic disease with liver involvement; there may also be ocular or neurological lesions. In animals, RVF may be inapparent in non-pregnant adults but outbreaks are characterised by the onset of abortions and high neonatal mortality. In the epidemics the diseases often pose the most evident economic impacts and in many cases also affect marginalized people most severely.

Rift Valley Fever was first identified in 1931 on a farm in the Rift Valley of Kenya. Since then, outbreaks have been reported in sub-Saharan Africa, North Africa and recently in 2000 on the Arabian peninsula. In Tanzania, epidemics have occurred at approximately ten-year intervals with three major epidemics reported in 1977, 1997/98 and 2006/2007 associated with unusual heavy rains(El-Nino). However, the nature and pattern of inter-epidemic infections of RVF and the impact of inter-epidemic infections is not well known.

This project seeks to understand the nature and pattern of inter-epidemic infections of RVF in livestock, wildlife and human by determining the abundance, diversity, distribution, ecology and infection status of the vector mosquito species. The results of this study will add to a body of knowledge of epidemiology of the disease and will inform the development of sound control strategies that will reduce the socio-economic impact of the disease to communities and the livestock industry.