Such was the publicity in both the press and on television that how could one fail to know of the Iceman, one of the greatest and least expected archaeological discoveries of all time? I had hoped that remains of mosses found with the ancient frozen corpse would come here from Innsbruck botanists known to me for many years. Only just back from holiday, I was greeted on the first day of the summer term of 1994, by a large box mailed from Austria. This was it! Within minutes of beginning to extract the mosses from the 47 glass vials it was clear that there was spread out under the microscope a potentially highly significant discovery: clues to the Iceman's provenance. Such is the ecology of some of the mosses I recognised that they must have traveled from low altitudes to high up the Alps with the Iceman. 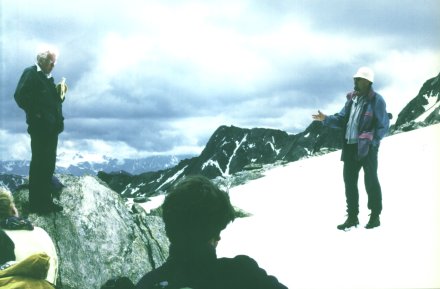 Jim Dickson in the Alps (left), Klaus Oeggl (right) at the site where Ötzi was found.

The name Iceman makes Ötzi sound like a character from science fiction. One of Dr Who's adversaries, perhaps? Along with most people, I like to call him Ötzi and in so doing to emphasize his ordinariness and recognize our close affinity. The name comes from the Öztal Alps where he was found in a very well-preserved state melting out of the ice in September 1991 at some 10,400 feet (3,210m) above sea level. With the top of his head thawing out first, he lay very close to the border of Austria and Italy in the territory of the latter nation but only Italian since 1919. When he died some 5,200 years ago Ötzi was about 45 years old, and about 5 feet 3 inches (160 cm) tall and well dressed in three layers of well-crafted skins and grass to face the rigours of being briefly in the zone of permanent snow and ice in the mountains. He had well-lined shoes, a belt from which to drape his loincloth and suspend his leggings, a jacket, a cape and a bearskin hat. His gear included a longbow and a quiver full of arrows, a hafted copper axe, a sheathed dagger, a wooden-framed backpack, two bark containers, one containing charcoal, and a belt pouch housing small useful items including flints, a retouching tool and fungus for tinder. He was inconspicuously tattooed with simple designs.

Ötzi's use of grass, bark and wood 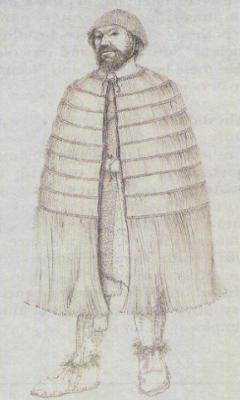 Ötzi wore a cape of grass and his shoes were packed with grass. Remains of no less than 17 different types of trees and shrubs have been recognised so far among Ötzi's gear. The bark used to make his containers was that of birch as the silvery white colour makes very obvious. His longbow was made of yew. Unexpectedly, the handle of his axe was also of yew; ash would have been the expected wood. However, the handle of his small dagger was made of ash. His arrow shafts were made of Viburnum (Guelder Rose or Wayfaring Tree) and Cornus (Cornelian cherry or Dogwood). Both these woods were used to make the arrow shafts recovered from the grave of an Iron Age prince found at Hochdorf, Germany. In the 19th century a peat cutter at Fyvie, Aberdeenshire, found a prehistoric flint arrow head with shaft attached; the shaft was Viburnum. Evidently, for a long spell of time over a large area of Europe arrow makers regarded Viburnum as very suitable. Lime made the body of Ötzi's retouching tool and lime bast was used for cords. His backpack frame was of larch and hazel. Leaves of Norway maple were used as insulating material for the embers he had carried in one of the containers which also contained leaves of juniper. For fuel he had used reticulate willow, green alder, Norway spruce, pine, elm and possibly amelanchier. A fruit of sloe was found with the corpse.

The Bryophytes (mosses and liverworts)

The scraps of mosses and the even smaller pieces of liverworts were washed from Ötzi's clothing and the mineral sediment and ice around him. There are not less than 80 different Bryophytes. Just like other plants, a moss or a liverwort species has a more or less distinctive habitat, a definite altitudinal range and a precise geographical spread. Some species only grow at low altitudes in woodland and others only at high altitudes close to long lasting snow patches. Some species are restricted to limy rocks while others avoid such substrata and some only grow in very acid peat bogs. Therefore taking account of the many species found with Ötzi, there is potentially much information to be deduced about his environment, his provenance and way of life if he had in fact been using the mosses.

Where did Ötzi come from?

Very few, if any, of the very many scientists and archaeologists who are studying Ötzi think that he came from far off. What is at issue is did he come from north or south of the Ötzal Alps, that is to say Südtirol (Italy) or Nordtirol (Austria)? Among the 80 or so species, there are many mosses that are characteristic inhabitants of low to moderate altitudes in woodland. Especially crucial are Neckera complanata and Neckera crispa. They grow in Südtirol much nearer the death site than they do in Nordtirol and there is no reason to doubt that the present patterns would have been in any way so different in Ötzi's time as to spoil the argument. Ötzi came from the Südtirol and probably Vinschgau, only some 20km and less due south of the death site, where the Neckera species are locally abundant, often growing together on shady vertical rock faces.

Was Ötzi using the mosses?

Some of the remains of mosses and liverworts are so very small, a few millimetres or even just fractions of a millimetre, that it is plausible that they had been merely sticking to Ötzi's clothes, just as some cereal remains had done. However, Neckera complanata occurs in one sample as a mass of tangled stems up to 6cm long. That species and Neckera crispa have highly detailed histories from archaeological sites of the Neolithic period onwards all over Europe. Assuming that Ötzi had gathered some of the mosses such as the Neckera species, what had he intended to do with them? Were they insulatory padding, hygienic wipes, medicinal or decorative? In 1994, to my discomfiture, the press had a field day in grossly overemphasising the toilet paper hypothesis. There were headlines such as "Soft, strong and very old", "He moss be Italian", and "Iceman mystery wiped away"

Why did Ötzi die where he did?

We now know that Ötzi had been shot in the back by an arrow and the wound was in all probability fatal and very quickly so. He could well have been standing on the edge of the hollow when he was killed. Why he was at that great altitude in the first place remains a matter of speculation and probably always will be. 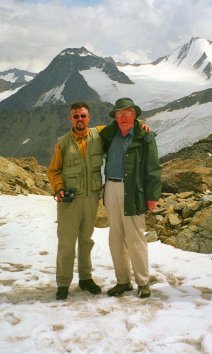 Prof. Klaus Oeggl and Prof. James Holms Dickson
Prof Dickson is retired Professor of Archaeobotany and Plant Systematics. He wishes to acknowledge the Carnegie Trust for the Universities of Scotland, the Leopold-Franzens-Universität, Innsbruck, the LLoyd-Binns Fund of the Glasgow Natural History Society, The Austrian Academy of Sciences and the Royal Society of London, the Royal Society of Edinburgh and the Leverhulme Trust for subsidising his visits to the Tirol since.

Ongoing Work on the Iceman

Since these web pages were first published in the 1990s we have learned a very great deal and the worldwide interest in this mummy has remained, stimulated by the sadly often too speculative and inaccurate reporting by the media. To list just a few advances: Recognition of arrow in the back, discovery of the severe wound to the right hand, the isotopes study showing that the Iceman had lived in one place as a boy and another as an adult, and the revelation of the complex details of the last journey by botanical analyses of the gut contents.

In principle, scientific work on the Iceman can go on indefinitely because the corpse is very carefully kept frozen in the special museum in Bolzano. As more and more non-invasive techniques are discovered so we shall learn about the life and times of this unique man.