Development of life-saving control strategies to eliminate rabies in Bali

Our rabies research team played an integral role in the design and ongoing evaluation of canine vaccination programmes to eliminate a rabies epidemic on the island of Bali. These campaigns controlled the spread of rabies in dogs and reduced the incidence of human deaths by over 90% compared with the incidence before the campaigns started.

Rabies is an infectious disease that kills at least 55,000 people annually, primarily in Asia and Africa, with infected dogs being the major source of infection in humans. In a recent rabies epidemic on the Indonesian island of Bali, between Dec 2008 and June 2011 over 130 human deaths occurred because the actions of the local authorities, such as dog culling, were insufficient to control the outbreak. 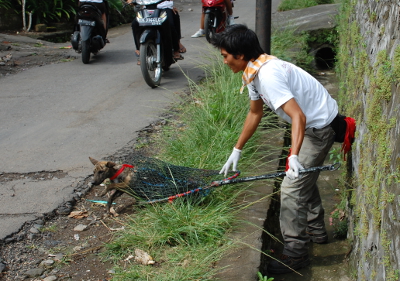 Research undertaken by the team in our Institute was instrumental in the development of an island-wide canine rabies vaccination strategy. Our researchers provided scientific support to the local and international animal welfare NGOs to design a robust vaccination demonstration and reveal the short-comings of culling dogs as a rabies control measure. With support from our researchers, the Bali Animal Welfare Association and the World Society for the Protection of Animals (WSPA) were able to engender the support of the local government, and launch the first nationwide vaccination campaign to vaccinate almost 250,000 dogs in 2010.

To advise on this campaign our researchers developed a computer-based model of the Bali epidemic (the Bali model) to predict the potential outcomes of different vaccination strategies. The result of this first campaign was 58 fewer human rabies deaths (a 70% reduction) and 29 fewer reported cases per month in dogs (75% reduction).

When the United Nations Food and Agriculture Organization (FAO) took over rabies control efforts in 2011, the Bali model was used as a technical resource for forward planning and evaluation of subsequent campaigns. As of July 2013, Bali had gone 11 months without a human case of rabies.

Our researchers have also provided significant training to local NGOs and government scientists in surveillance and recording techniques, to ensure that progress towards rabies elimination is carefully monitored. 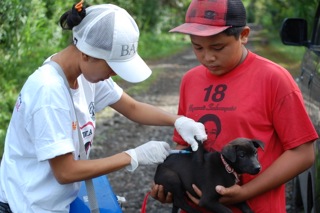 The model has also informed a key piece of advocacy for global rabies control by WSPA. Working with the Royal Veterinary College London, the Bali model was used to project the potential economic outcomes of different control strategies. This provides a means by which WSPA can advocate to governments of rabies-endemic countries the cost-benefits of mass vaccination programmes over dog culling.

<< Impact of our research