We are pleased to announce that Neil Burns successfully defended his thesis on 22nd January. Neil has been working with Dr David Bailey and Dr Peter Wright (Marine Scotland Science) since he joined the Institute of Biodiversity, Animal Health and Comparative Medicine in 2013. Dr Grant Hopcraft and Dr Clive Trueman from University of Southampton examined his thesis “Distribution, population structure and connectivity in whiting (Merlangius merlangus)” Here, Neil gives us a short summary of the key findings from his research.

Globally, the majority of assessed fish stocks are either fished to maximum capacity or are being exploited beyond sustainable levels. Given that hundreds of millions of people around the world derive a substantial part of their nutrition from fish, and by 2050 feeding 9 billion people will be a global challenge, understanding how to restore stocks to healthy levels is of great scientific importance. However, reducing the original fishing pressure often does not result in a return to previous abundances. These efforts may be confounded by fish moving large distances during their life cycle. 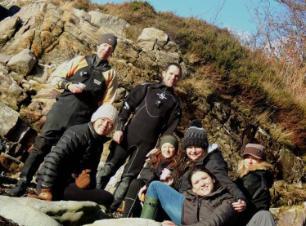 Waters to the west of the UK offer a useful system to explore these effects. Gadoids (cod-like fish) in the Firth of Clyde on the southwest coast of Scotland have recently experienced a reduction in direct fishing pressure, having previously been subjected to high exploitation. Small, young whiting now dominate this ecosystem replacing larger gadoids like cod. My thesis set out to explore the distribution and life stage connectivity of whiting as a possible explanation for their dominance in the current community structure.

I initially used generalised additive mixed effects models to describe the distribution of three key life stages in whiting. This allowed areas of particular importance to age-0, age-1 and mature fish to be revealed. I then explored the potential use of otolith microchemistry to quantify the connectivity between these life stages. Otoliths (fish ear bones) are calcified structures which accrete distinct layers throughout the life of fish and incorporate elements which can be reflective of the environment occupied at that time. Unique elemental signatures can therefore be assigned to groups of fish occupying the same body of water and can be seen to vary spatially. I initially described the scale of spatial variation in element signatures using several traditional techniques. In my final chapter I developed a novel method of probabilistic assignment to geolocate whiting from their otolith microchemistry. Generalised additive models were used to predict element “landscapes” for the Scottish west coast and Irish Sea, using spatial and environmental covariates. A maximum likelihood method was then applied to predict the origin location of fish and used to infer their movements. Demographic connectivity and population wide patterns were then inferred by combining individual life histories.

The findings here suggest dispersal and life stage connectivity play a significant role in maintaining the currently seen high abundance of small, young whiting in the Firth of Clyde. It may also explain the absence of large, older individuals. Importantly, the novel method developed here can be applied to other species to retrospectively infer their geographic location from otolith microchemistry. This method offers more scope for the analyses of otolith microchemistry that traditional classification approaches.

Congratulations Dr Neil Burns! Neil is currently submitting grant applications in the hope of continuing his work here at the Institute with Dr David Bailey. We wish you all the best for the future.