Research by Professor Sarah Cleaveland and her team led to the development and adoption of new health and veterinary policies in East Africa, transforming research findings into practical strategies for rabies prevention and control. 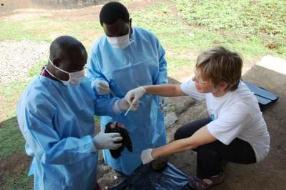 Rabies is the most lethal known infectious disease and kills 55,000 people annually worldwide, mainly in Africa and Asia. Rabies is almost entirely preventable. Effective vaccines for animals and humans are available, but their use is limited by cost and accessibility.

The work of the Glasgow team directly influenced decisions made by government health and veterinary authorities in Tanzania and Kenya. In Tanzania new standard operating procedures for measures that both control rabies in animal populations and prevent rabies from developing in humans have been developed and implemented. In Kenya, the team is currently developing a national rabies control and prevention plan for the Kenyan government. At the global level, efforts have led to the drafting of a resolution on the global elimination of canine-mediated human rabies which was tabled at the WHO World Health Assembly, the vehicle for controlling the budget and policy decisions of the WHO, ensuring policy discussion at the highest inter-governmental levels.

Additionally, Glasgow-based researchers conceived and steered the development of the ‘Rabies Blueprint’ in collaboration with the Partners for Rabies Prevention, an independent group of rabies experts from international agencies. It is a web-based resource (www.caninerabiesblueprint.org) launched in June 2010 and provides a step-by-step guide for health authorities in rabies-endemic areas.

The Rabies Blueprint combines all of the relevant existing rabies control guidelines, addressing the responsibilities of each stakeholder, legislative frameworks, costs and implementation strategies. The Blueprint has been used in many regions with a high incidence of rabies, such as Africa (Uganda and Benin) and Asia (Afghanistan and Indonesia).