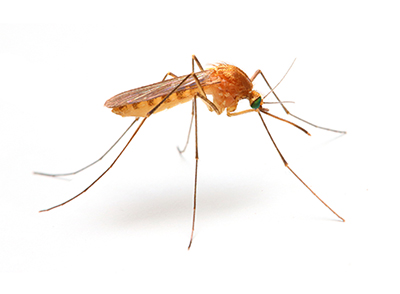 Nearly half the world's population is at risk of malaria with sub-Saharan Africa carrying a disproportionately high share of the global malaria burden. In 2016, an estimated 216 million people contracted the disease with 445,000 people dying from it. Malaria is caused by the Plasmodium parasite, which is transmitted through the bite of an infected female Anopheles mosquito. Scientists at Glasgow are at the forefront of efforts to understand the ecology and behavior of these mosquito vectors in Africa in a bid to improve malaria control and ultimately eradicate the disease.

Professor Heather Ferguson from the University’s Institute of Biodiversity, Animal Health and Comparative Medicine (IBAHCM) is an infectious disease ecologist who has research focuses on mosquito vector ecology and control. Much of her research involves collaboration with the Ifakara Health Institute (IHI) in Tanzania, a global leader in malaria vector control research.

The overarching theme of Professor Ferguson's work is to study the ecology and behaviour of the main malaria mosquitoes with the aim of using this information to produce innovative strategies for controlling mosquitoes and protecting people. She and other colleagues from the IBAHCM including Dr. Francesco Baldini, Dr. Lisa Ranford-Cartwright, Dr. Mafalda Viana and others are collaborating with institutes in several African countries on research aimed at improving diagnostics and control for malaria. 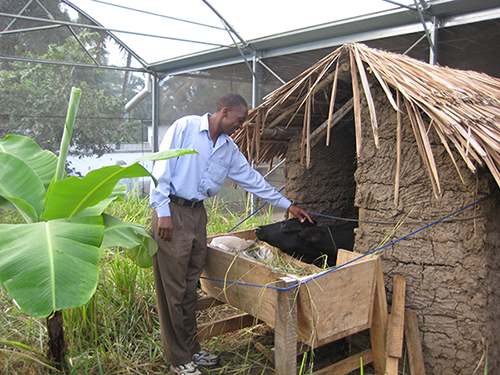 One of the semi-field systems containing cattle sheds, livestock and local vegetation

One of Professor Ferguson’s primary research areas is the development of new research tools that enable a more detailed investigation of mosquito behaviour and life-history under realistic environmental conditions. "A lot of our early work was focused on bridging the gap in the range of research tools available to study mosquito vector ecology,” says Professor Ferguson. “Historically, mosquito behavior and ecology has been studied either under highly controlled laboratory or under field conditions. Both these routes have limitations – lab studies allow precise measurements but under artificial conditions, whilst several aspects of mosquito life-history and behavior are difficult to observe in the field, and/or cannot be safely studied without risk potential exposure to disease.”

To bridge this gap, Professor Ferguson and colleagues at IHI established a series of 'semi-field systems' within a rural setting of southern Tanzania, which historically has had some of the highest rates of malaria transmission on record. Semi-field systems are essentially large, netting-enclosed cages built in the natural environment of mosquito vectors, and within which all the required features for mosquitoes to complete their life cycle are present. The systems are large enough to establish miniature replicas of typical domestic environments, including houses built to local Tanzanian design, cattle sheds, vegetation and the small puddles and pools that malaria mosquitoes use to lay their eggs.

A critical feature of these enclosed habitats is that mosquitoes from outside cannot enter, and those introduced into them cannot leave. This means it is possible to establish mosquito populations within them that are free from malaria or other pathogens, and to study their behavior in close detail.  Whilst previous work had shown malaria mosquitoes can be kept in large field cages, scientists at IHI and Professor Ferguson were the first to demonstrate that mosquito populations can be maintained over multiple generations, while retaining much more natural behavior and levels of genetic diversity than those reared in the laboratory.

Professor Ferguson and colleagues from IHI established the first semi-field system in Tanzania in 2006. Since then, these have been significantly expanded into an extensive suite of semi-field systems known as the ‘Mosquito City’.  These facilities include 5 large semi-field systems encompassing at least 25 separate mosquito population cages; providing some of the most comprehensive facilities for mosquito ecology research in the world.

These semi-field systems have been used for a wide variety of research, ranging from studies of mosquito survival and reproduction, to early-stage testing of a range of promising vector control interventions including repellents, mosquito traps, housing modifications, insecticides and drugs that can be given to cattle which kill the mosquitoes that bite them.

One of the semi-field systems containing cattle sheds, livestock and local vegetation 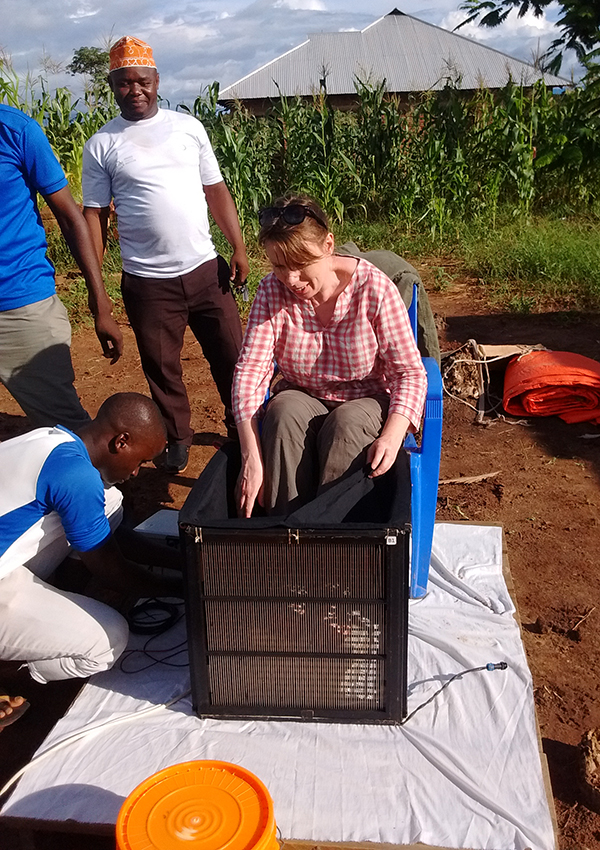 The use of semi-field systems for testing novel vector control interventions is particularly valuable. In the past 15 years, insecticide treated bed nets (ITNs) have been the vector control strategy used in African countries. ITNs have proved highly effective, and have played a large role in the halving of malaria prevalence in Africa over this time. But there is concern in the scientific community that this control method has now peaked.

“This is because ITNs primarily target mosquitoes that feed indoors during sleeping hours,” explains Professor Ferguson. “While many African malaria mosquitoes have this behavior, there are some that can bite earlier in the evening and outdoors. These mosquitoes can sustain ‘residual transmission’ even in areas where everyone uses a bed net.”

In collaboration with scientists in Tanzania and Burkina Faso, researchers from Glasgow have been developing and testing a number of new surveillance tools to monitor for long-term changes in malaria mosquito behaviour in areas where ITNs are heavily used.

One example is the ‘mosquito electrocuting trap’, a tool developed jointly by scientists at the IHI and Glasgow to provide safe measurement of the number of mosquito bites people are exposed to in and around their homes.  Traditionally, this has been measured by conducting ‘human landing catches’, in which a volunteer will expose part of their leg and collect the mosquitoes that land upon it as an index of their biting rate.  While this method gives a realistic measure of mosquito exposure, it is risky in that those participating in collections are exposed to mosquito bites.

Working with the University’s Bioelectronics Unit and with funding from the European Commission, the UofG-IHI team developed a new method based on surrounding a human participant with a series of protective, electrified fences.  Air flows through these barriers so mosquitoes are attracted to human odour just as they would be naturally, but before they can land on the person they hit an electrified surface and are killed.  “This system is safe to use in close proximity of people, and protects them from bites. It provides a valuable exposure-free alternative to the more risky human landing catch method,” says Professor Ferguson. This tool is currently being evaluated for monitoring the biting activity of the malaria mosquitoes in Tanzania and Burkina Faso.

This and other trapping methods designed to catch mosquitoes resting outside of homes are being utilised in several studies investigating mosquito vector behavior.  This includes a long-term study of malaria mosquito behavior in an area of southern Tanzania where ITNs have been widely used for over a decade. This 5-year study was a collaboration between Glasgow, IHI and the University of California, aimed at testing for gradual shifts in mosquito vector behavior in response to ITNs. While results are still being analysed, initial findings indicate that the numbers of malaria mosquitoes continued to fall through time, but a growing proportion of survivors switched from resting inside to outside of houses where they are harder to reach with insecticides.

Just as changes in mosquito behavior may be undermining vector control, so too is the emergence of widespread insecticide resistance. Resistance to the common insecticide classes used in bed nets has now been documented in mosquito vectors all over Africa; with potentially serious implications for the continued success of malaria control.

In collaboration with the Liverpool School of Tropical Medicine, researchers at Glasgow recently discovered that the consequences of insecticide resistance may be different than expected. They showed that mosquitoes which are officially classified as ‘insecticide resistant’ based on World Health Organisation criteria can actually suffer significant longer-term reduction to their survival. These reductions are not very apparent in the first 24 hours after insecticide exposure when the effects of insecticides are typically measured, but accrue gradually over the remainder of the mosquito’s lifespan.

Professor Ferguson states: “as only relatively ‘old’ mosquitoes are capable of transmitting malaria - because the parasite takes a long time to develop within them - these longer-term survival reductions could be enough to reduce the malaria transmission potential of mosquitoes by at least 50%.  This indicates ITNs may still be having a significant role in malaria transmission even in areas where insecticide resistance is high." These findings were drawn from laboratory experiments, and so much more work is still required to confirm whether this also happens in the field.

These findings of delayed effects of insecticides on mosquitoes highlight one of the central challenges in malaria control – how do we reliably measure the impact of control measures on mosquito vector populations?  Given that some of these impacts may be subtle, it is really important to have accurate methods for measuring small differences in mosquito survival and behavior under natural field conditions.  Previously this has been very difficult as there is no reliable and precise method for estimating mosquito age under natural conditions.  However with support from the Global Challenges Research Fund, our scientists are leading efforts to develop a new method for predicting mosquito age based on mid-infrared spectroscopy along with colleagues at IHI in Tanzania and Institut de Recherche en Sciences de la Sante Burkina Faso.

This approach measures changes in the composition of the mosquito cuticle, the outer layer of its body. As mosquito cuticular composition varies between species and with age, mid-infrared spectroscopy could be used to predict these traits in wild mosquitoes.  Dr Francesco Baldini is coordinating these efforts in Glasgow in collaboration with the School of Chemistry (Prof Klaas Wynne, Dr Mario Gonzalez), School of Engineering (Dr David Childs, Mauro Pazmino) and Heather Ferguson.

“I am thrilled that we are developing a tool that can revolutionize medical entomology, which means better control of mosquitoes and the diseases they transmit. I am also really enjoying being part of a truly interdisciplinary team combining chemists, engineers, biologists and computing scientists working together to improve public health” Dr. Francesco Baldini

Through this project, equipment and training to carry out mid-infrared spectroscopy analyses has been established at our collaborating institutions in Burkina Faso and Tanzania.   Our partners in Africa are currently testing the accuracy of this method in natural field conditions. If successful, this technology could be a game changer with respect to improving our ability to monitor mosquito vector populations and their response to control.

One Health at Glasgow

Professor Ferguson is a strong proponent of the One Heath approach. The complex ecology and behaviour of mosquito vectors is intricately linked with the environments in which they are embedded. Simply studying parasites in people or mosquitoes at the point of biting only gives a partial view of the malaria transmission cycle.

"It's absolutely essential we take a One Health approach when studying the mosquitoes that transmit malaria and other vector-borne diseases”, explains Professor Ferguson. “Just studying malaria infection in humans alone means you only see the end result of the environmental phenomena that led to their exposure and infection.  To prevent this exposure from happening in the first place, it is essential to look at the environmental, social and political factors that allow mosquitoes and parasites to proliferate.”

The University of Glasgow has played an important role in supporting this research into the mosquito vectors of malaria and other diseases like Dengue, Chikungunya and Zika. As Professor Ferguson states: "The focus here is on research excellence, collegiality and strong, equitable international partnerships focusing on addressing public health problems in the countries that bear the highest burden”.

Furthermore, the University priorities the needs of our African partners working on the disease, something that, as Professor Ferguson points out, as crucial if we are to ever successfully eradicate malaria:

"Glasgow focuses on research that is African-led and built around the priorities of our African partners. There's a great team here; a lot of opportunities and support for collaborating and training African students and scientists, who are brilliant, and will be the ones to eliminate malaria."