The Gas Sight camera they have developed allows real-time video images of methane gas. To do this it utilises a technique pioneered at Glasgow called single-pixel imaging.

While gas imaging technology has been commercially available for some time, current systems are expensive, bulky and power-hungry. Single-pixel imaging uses just one light-sensitive pixel to build digital images instead of using conventional multi-pixel sensor arrays, which can be prohibitively expensive for infrared imaging. This allows the researchers to build a much smaller, cheaper gas detection system.

How does single pixel imaging work?

The scene in front of the sensor is illuminated using a sequence of infrared patterns created using a laser tuned to 1.65μm (the absorption wavelength of methane) and display technology commonly found in digital light projectors. Using sophisticated sampling techniques and reconstruction algorithms, the researchers can create a real-time, colour-coded, image of the gas which is then overlaid on an image of the scene obtained from a conventional colour camera.

The detector allows the production of images which refresh 25 times a second, equivalent to the standard frame rate of video, which provides a highly accurate real-time picture of the scene in front of the detector.

Real-time video imaging of the gas has a key advantage over conventional technologies in that it can speed up the time required to locate a gas leak. Watching the gas flow in real-time conveys the direction from which it is dispersing. From this, the source of the leak can be determined. For gas utilities, and many other industrial settings, this technology offers reduced maintenance times for gas pipe infrastructure and improved safety. 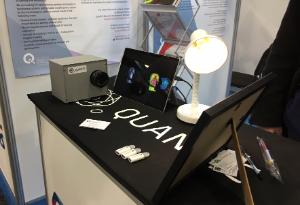 D‌emonstration of the gas sight camera

Partnerships to realise a market potential

The Optics research group at Glasgow specialises in experimenting with the quantum properties of light. Their collaboration with M Squared Lasers was facilitated by QuantIC, the UK’s quantum imaging technology hub, which is based at the University. QuantIC aims to bring a range of new sensing technologies into the market. The global gas sensing market was estimated at $1.78 billion in 2013 and is expected to be worth $2.32 billion by 2018, offering an attractive opportunity for new technology.

"Working with M Squared Lasers, with the support of QuantIC, has been of immense benefit to the project. M Squared’s advanced laser systems allowed us to effectively ‘tune in’ to the wavelength of methane gas, and opens up the possibility of using the system to detect other types of gases in the future.”

“Close collaboration with QuantIC has helped M Squared to identify and create lower cost, compact, greatly improved imaging solutions that are suitable for a range of industries. “We’re keen to continue our collaboration to bring this project to market and to build on this foundation to create single-pixel sensors capable of detecting a wide range of other sources.”

The details of the camera were published in Optics Express, in February 2017 titled ‘Real-time imaging of methane gas leaks using a single-pixel camera’. Since the paper was released, the partners have been developing a more advanced Gas Sight system (Gas Sight 2.0), which has better range capabilities, larger field-of-view and higher resolution.

“Since the initial development of the camera we have been continually improving its performance and have taken it to several key international events with M Squared Lasers, such as Photonics West 2017 in San Francisco and Laser World of Photonics 2017 in Munich, which has been an invaluable experiences."

D‌emonstration of the gas sight camera