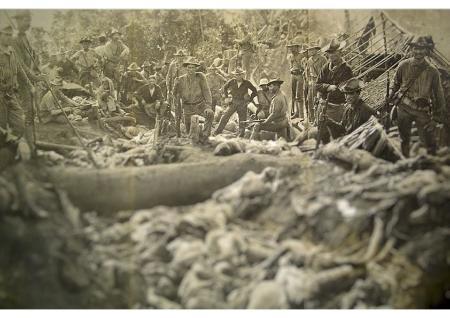 In March of 1906, American military forces launched an assault on Bud Dajo, an extinct volcano on the island of Jolo in the southern Philippines, where hundreds of local Tausug people, known as Moros, had entrenched themselves. The Moros, who were Muslim, refused to submit to American authority after the islands had been seized by the U.S. in the aftermath of the Spanish-American War in 1898. Armed only with knives, spears and a few outdated guns, the Moros held out for three days against the overwhelming firepower of the Americans, which included mountain artillery, machineguns, repeating rifles and revolvers loaded with expanding bullets. At least 1000 Moro men, women and children were killed, while the U.S. forces suffered just 21 dead. The massacre at Bud Dajo rightfully belongs in the same category of historical atrocities as Wounded Knee in 1890 or the better-known My Lai Massacre of 1968. In terms of the numbers of victims, it is arguably the biggest massacre in American history. Yet while Wounded Knee and My Lai have become emblematic of American atrocities during the Indian Wars and Vietnam War, respectively, Bud Dajo has been largely forgotten. This paper examines the massacre and will for the first time reconstruct what took place in this far-flung corner of the American empire within the global context of Western imperialism and 'savage warfare' during the decades preceding the First World War.

The event will be in person but registration via Eventbrite is essential.